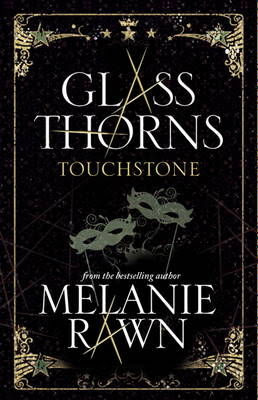 Cayden Silversun is part Elven, part Fae, part human Wizard - and all rebel. His aristocratic mother would have him follow his father to the Royal Court, to make a high society living off the scraps of kings. But Cade lives and breathes for the theatre, and he's good - very, very good. With his company, he'll enter the highest reaches of society and power, as an honoured artist - or die trying.

I have to admit that I have had a rather hard time reviewing this book and it's taken me a few attempts to write what I think is a fair review.

Melanie Rawn has always had a bit of a Tolkien style to her writing and in the way that she creates her worlds and characters.  That's no difference here.  She takes a very 'matter of fact' approach to proceedings.  This leads to a world inhabited by pretty much every fantasy creature that you could possibly think of.  But here's the catch.  They can all interbreed, which they do, and this leads to pretty much nobody being a pure blood.  It's true that this leads to some rather interesting characters through their mix of creatures but some of them came across as a bit of a gimmick.

The characters themselves are OK for the most part but definitely not some of Rawn's best work by far.  A few them exist just to be there for a quick mention and are then never heard of again.  I'm not sure why fantasy authors are prone to this recently but I've read quite a few books lately where that very same thing happens.

Out of all the characters here, one stands out the most.  Cayden Silversun, who is part Elf, part Fae and part human wizard.  In fact, he comes across like a mix of David Bowie's character in 'Labyrinth' with a bit of the rebellious rock star attitude thrown in amongst all his magical skills.  The problem with this character being so well written is the simple fact that the rest of them don't really live up to the promise set by Cayden's character.  That's a real shame because Rawn can write a lot better than she has here.

Another problem is with the main story itself.  On paper you expect one of two things from the synopsis.  A story jam packed with action while the characters go on a quest to find the right person to fit in to their group to make them whole again.  Or a story that would be a deep character driven tale that makes you care so much about what happens to the characters then you can't wait to get to the next page.

Here, we have neither of those sadly.  What we do end up with is a story not a lot happens, there are a couple of flashes of the old Melanie Rawn style and then the book ends with no questions answered and to be perfectly honest, no ending.  It just kind of stops.  That's a real shame because Rawn is so much better than this novel makes her out to be.  Another thing that annoyed me was for most of the novel it was told from the point of view of Cayden himself but then it suddenly and without warning chances to that of his best friend only to revert back near the end of the novel.  It made the whole thing seem quite disjointed.

It's not all completely bad though.  The flashes of the old Melanie Rawn brilliance that I mentioned are very good and do raise the quality of the story up a bit.  I did like the idea behind there having been a war that the use of magic created many atrocities and that Cayden's relatives were behind some of these was very interesting but alas wasn't really explored all that much.  Hopefully they will touch on it in the next book.

While not an awful addition to the fantasy genre, I was still a bit disappointed because of the simple fact that Melanie Rawn wrote this and that maybe put too much expectation in to my mind.  She has written much better books than this but there are still some good moments to keep the more hardcore fantasy fans interested.

Posted by Pat Scattergood at 07:58