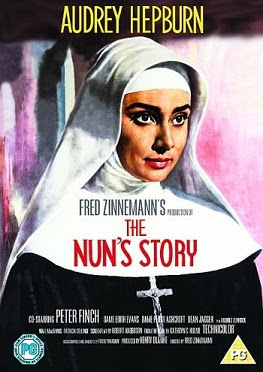 Gabrielle Van Der Mal gave up everything to become a nun. But her faith and her vows are forever being tested: first in the missionary Congo hospital where she assists the brilliant and handsome Dr. Fortunati and then at the mother house in France when World War II has broken out and the nuns are forbidden by the order to take sides.

Audrey Hepburn has always been a favourite of mine but for some reason she's always been a rather under rated actress.  Some detractors have even classed her as just a model appearing in movies and not an actress but I feel that is incredibly unfair.

Hepburn was a very good actress and always gave a subtle, nuanced performance no matter how big or small her character was.  That is more than evident here.  In fact, I would even go so far as to say that while not her most famous performance in her career, it's most definitely her best.

Hepburn plays a young lady that decides to follow her religious calling and become a nun.  Almost as soon as she enters the convent she begins to have problems with the rigid nature of the routine there.  Once she has passed all the tests needed to become a nun, she is first sent to a mental hospital and then to the Congo where her faith is severely tested.  However when the Second World War breaks out, her faith is put to it's absolute limits.

'A Nun's Story' is an incredibly beautiful and slowly paced movie.  While there aren't explosions every five minutes, that doesn't mean that a movie like this should be ignored by general movie watchers.  Also don't let the heavy religious slant that this movie takes put you off either.  I'm not religious in the slightest yet I absolutely loved this well written and superbly acted movie.

The  cast is absolutely spot on and all give very strong performances but it's one womans movie by far.  Audrey Hepburn completely owns this movie.  Her gentle and emotional performance as Sister Luke had me gripped from start to end.  Watching her move through all the things that happen to test her faith was a thing of sheer subtle beauty.  In fact, if you want to become an actor or actress I would say to watch this movie to see how to give a slow and emotional performance that would grip the viewer.

While the movie is an absolute classic, the ending done in silence was incredibly moving, the DVD release itself is very disappointing.

The transfer isn't very good with the sound going quiet then loud and the picture  really struggling in places.  While a lot of  that is down to the age of the movie, they could have done a bit of a better job than they have cleaning it up.

The lack of special features is a massive let down as I would have loved to have seen a behind the scenes or maybe a look back at the movie.  Instead we don't even have a trailer, which is a real shame.

All in all, this is an absolute classic of a movie and Hepburn gives the best performance of her entire career.  It's worth buying this heavyweight of a movie for her performance alone but just be prepared for a bit of a disappointing transfer and a severe lack of special features.

One last thing, how on Earth did Audrey Hepburn not win an Oscar for this movie?

Posted by Pat Scattergood at 23:20