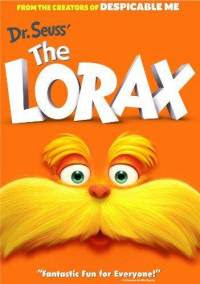 A 12-year-old boy searches for the one thing that will enable him to win the affection of the girl of his dreams. To find it he must discover the story of the Lorax, the grumpy yet charming creature who fights to protect his world.

Before I review this I have to admit one thing.  I've never read the Dr Seuss book all the way through so I have no idea how faithful this is to that so I'm not going to be judging it on that aspect.

After the movies 'The Grinch', 'The Cat in the Hat' and other such Dr Seuss adaptations hit big at the box office, there has been a steady stream of them coming at us movie goers.  Some of them have been great at capturing the spirit of the stories and others, not so much.

This one, while being a good movie, isn't one of the great ones.

What we do have here however is a funny movie with quite a sweet message about looking after the Earth because if we don't we could lose all the things we take for granted.  While that is a very admirable message, it's handled in quite a heavy handed way.  The best way to describe what I mean is to describe it as a 'iron hand in a velvet glove' as the saying goes.

That's not to say that this movie isn't enjoyable because it really is.  The vocal performances by the cast make the well created characters really come to life.  Zac Efron and Taylor Swift do a great job with the young lead characters but this is definitely Betty White's movie.  Her absolute fantastic performance as Granny Norma had me in hysterics more than once.  She gave what could have been a bit of a forgettable character in to one of the best in the movie.

That performance is very nearly matched by a cynical and grumpy performance by Danny DeVito as The Lorax, a creature who wants to protect the forest from getting cut down.  While it is true that not all of the gags work, Devito's performance makes the character really come alive.

One of the downfalls of this movie is the rather disappointing songs.  While they are very catchy, they tend to all merge in to one.  It's true that they are all different styles but for some reason they just don't come across as memorable.  They also suffer from the same problem as the movie in that they are really heavy handed in how they deliver their message to the viewers.

This is a family movie but I have never been a big fan of having stories dumbed down because, as a father myself, I know children are much more intelligent than we maybe give them credit for.

The special features could have been a little better but there are a couple of little gems here such as the deleted scenes.  I won't spoil them for you here but they were really good to see.

All in all, while not the best Seuss adaptation that's been put out there, it's still an enjoyable and funny family movie with some great performances and an important message, even if it is delivered in a rather heavy handed manner.

Posted by Pat Scattergood at 12:46