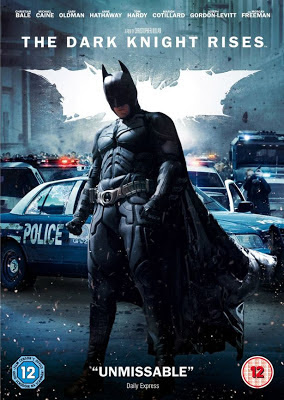 Eight years on, a new terrorist leader, Bane, overwhelms Gotham's finest, and the Dark Knight resurfaces to protect a city that has branded him an enemy.

Bane comes to Gotham City to destroy not only the city but his nemesis Batman. Bane is an intelligent but brutal terrorist intent on causing as much death and destruction as possible but is Batman too caught up with the appearance of Catwoman to be able to stop him?

When it was announced that Bane was going to be one of the main characters here, it brought back memories of the absolutely piss poor version put on the screen by Joel Schumacher. This version of Bane couldn't be more different than that one dimensional portrayal. Here Bane is not only massively strong, he's massively intelligent and more than a match for Batman himself.

Bane is played with menacing glee by the brilliantly cast Tom Hardy. At first I wasn't sure he would be able to pull off such a imposing character but he more than proved this fan wrong. While I wasn't a massive fan of the costume at first, it really grew on me as the movie went on.

Christian Bale gives his normal brilliant performance as Batman and Bruce Wayne and really gives the character a fragile quality. After the events of the last movie, Bruce Wayne is broken both physically and mentally. It's really an uphill battle for him to strap on the cape and cowl one more time and Bale shows that fantastically here. You really do believe that Batman has no chance of survival yet alone victory.

Anne Hathaway as Catwoman / Selina Kyle is the weakest of the cast but still gives a smooth performance and also manages to give the character many different layers. That really helped her to be more than a sideline compared to the main story involving Bane.

The rest of the cast are absolutely perfectly cast. Michael Caine gives an absolutely heartbreaking performance as Alfred and Morgan Freeman is also good in his role as Lucius Fox as always.

However it's Gordon Joseph-Levitt that surprised me. When I read that he had been cast I was wondering what kind of a part he would have and while I won't spoil anything here, lets just say he plays a major league part and plays it very well.

The only disappointing part of this release is the distinct lack of extras.  The one special feature that is there is a fantastic one but I was really hoping that there would be loads of goodies here but hey, when the movie is this good then that more than makes up for it.

Overall I honestly think that this is the best of the Dark Knight trilogy by far. The first battle between Bane and Batman plays out just like the battle they have in the 'Knightfall' saga and it's little nods like that which really make Christopher Nolan's Batman movies some of the best comic book movies I've ever had the pleasure of seeing.

This one is no exception. From start to finish it's an exciting yet heartfelt ride through what may be Batman's last stand.

Posted by Pat Scattergood at 12:47