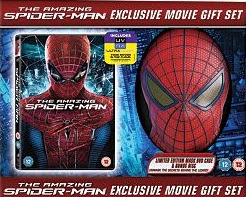 Written By James Vanderbilt, Alvin Sargent and Steve Kloves based on characters created by Stan Lee and Steve Ditko
Directed By Marc Webb

Peter Parker finds a clue that might help him understand why his parents disappeared when he was young. His path puts him on a collision course with Dr. Curt Connors, his father's former partner.

When I heard that there was going to be a reboot of the Spider-Man series of movies I have to admit that I thought that it would be one of the more pointless reboots that we have been subjected to in recent years.  I mean, afterall the Sam Raimi trilogy wasn't made that long ago so why reboot it?

Well, in a way, I'm kind of glad they did.  This darker and well made retelling of the origin of the character washes the taste of the very hit and miss 'Spider-Man 3' out of memory.

This movie isn't without it's flaws but unlike 'Spider-Man 3' those flaws are minimal.  The first is the choice to make the Peter Parker character quite cocky at times and that's before he even got his powers.  I can understand making him quite cocky when he discovers his powers because they obviously go to his head but being cocky beforehand just didn't seem right.

The second flaw is just one of personal taste in all honesty.  I don't like the mechanical web slingers.  I never have done, not even in the television series from the 70's.  I've always been more of a fan of the biological ones but that's just a matter of personal preference like I mentioned before.

Casting wise this movie is really packed with strong performances.  Having a legendary actor such as Martin Sheen as Uncle Ben was a move of sheer genius and really added a gravitas to the character so that when the inevitable fate that awaits him actually happens it hits the viewer like a brick.  Sally Field as Aunt May was a great choice too and the chemistry between her and Sheen was great.

When it was announced that Rhys Ifans was cast as Dr Curt Connors, I have to admit that I didn't think he could pull it off.  I was completely wrong on that front.  He gives a really sympathetic performance as Connors and really makes the character his own.

However, it's most definitely the movie of two people.  Andrew Garfield and Emma Stone by far own this movie.  I remember seeing Andrew Garfield in a two part episode of Doctor Who called 'Dalek's in Manhattan / Evolution of the Dalek's' that was filmed during the Tennant era so I knew he could act yet here Garfield gives a great performance as Parker and Spider-Man, making the two of them as different as is possible.  He treats the two as if they are completely separate entities and gives them both completely different mannerisms.  Emma Stone as Gwen Stacey is superb.  I wasn't really aware of very much of her work in all honesty but after seeing her in this I will definitely be checking out her other movies.  The chemistry between the two characters isn't rushed or forced and even when all hell is breaking loose, the relationship between them grows in such an organic way that it makes this quite a personal movie.

Directing wise Marc Webber has done a superb job.  The darker nature of the movie and some amazing directing choices had me on the edge of my seat on more than one moment.  The action scenes were done brilliantly and not once did they seem cluttered or confusing like they have been in some other recent super hero movies.

One of the traditions of watching the recent Marvel Comic's movies for me has been to spot the Stan Lee cameo and this one was definitely worth seeing.  Both action packed and hilarious at the same time, it was a nice touch to the movie,

Special features here are superb.  I got the special two disc version of the movie that comes with a DVD case in the shape of Spider-Man's mask that I thought was a really touch for a comic book nerd such as myself.  In the mask is an exclusive disc looking at the evolution and creation of the Lizard character and is an absolutely fantastic look at all the work that  went in to the character.  In all honesty, it's worth splashing out on the special edition (available in Asda in Europe and Walmart in the States) just for that special feature alone.

The rest of the special features are good in themselves as well.  The commentary was especially interesting to a Spider-Man fan such as myself and the deleted scenes offered a good look in to what didn't make it in to the movie.  My favourite of the special features here, other than Lizard feature on the exclusive disc, was the look at the stunt rehearsals because the sheer amount of skill that went in to the setpieces in the movie is downright amazing.

All in all, a fantast reboot for a legendary character.  When I went to see this at the cinema, I was at first a little disappointed just because it wasn't what I was expecting.  When I took the time to sit and watch it at home, I noticed all the little things that I had missed and that really ramped up the quality in my eyes.

Well worth picking up as it's a truly amazing (sorry) superhero movie.  I, for one, can't wait for the sequel.