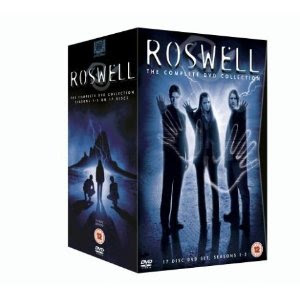 
"I'm Liz Parker and Five Days Ago I Died.  After That, Things Got Really Weird."

Having grown up quietly in New Mexico, three teenagers suddenly have their deeply hidden secret jeopardized after a rash decision by Max.  Now the three of them must open their lives to their new friends while fighting an enemy within.

At stake are their lives and the lives of their entire race.  Tough decisions have to follow along with tragic circumstances.

Review
One of the best television shows of the late 90's and early 2000's is collected here in it's entirety.

The first season does a great job of establishing the characters, their motives, their enemies and the overall tone of the show.  By the end of the series you really have gotten involved in the lives of the characters.  You sit on the edge of your seat watching their lives unfold in front of your eyes.

The second season treads a slightly darker path when a tragedy befalls one of the group. The episodes that lead up to that and then the aftermath are brilliantly written and brilliantly acted as is the shocking end of the season.  In fact, the ending made me want to start watching the third, and sadly final, season straight away.

The third season really blows up and leaves a trail of destruction and devastation in the midst of the betrayal at the end of the second season. Tough decisions are made and while a couple of loose ends are left, I think it was a great way to end the show.  It was a real shame that the show had to end but they did it well.

The picture and the show are superb and only slightly struggle every now and then but not enough to be distracting, hence the high mark.

As for the extras, each one may be a might short but they're incredibly informative. The commentaries are incredibly detailed and fun at the same time.  I loved the little behind the scenes moments where they showed just how close knit the cast had actually become.

Some people unfairly described this show as Dawson's Creek with Aliens but I feel that is incredibly unfair. It's much better than that and really doesn't pander to the notion that programs like this have to be dumbed down. All in all an intelligent and exciting addition to any science-fiction fans collection.

In a bit of trivia for all you sci-fi fans out there, Jonathan Frakes, Riker from 'Star Trek: TNG' produced and directed some of the episodes of this show.
Movie 4/5
Picture 4/5
Sound 4.5/5
Special Features 4.5/5
Overall 17/20
Posted by Pat Scattergood at 15:03