Planet of the Apes: The Ultimate Collection DVD Review 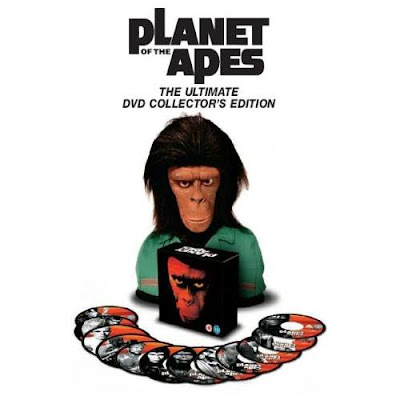 Beneath the Planet of the Apes
Kim Hunter as Zira
James Franciscus as Brent
Maurice Evans as Dr. Zaius
Linda Harrison as Nova


This amazing collector's item is an individually numbered, limited edition, Ape head containing 12 DVDs within a digistack, which slots into the back of the head!
Planet Of The Apes: 35th Anniversary Edition (2 Discs): Astronaut Taylor crash lands on a distant planet ruled by apes who use a primitive race of humans for experimentation and sport. Soon Taylor finds himself among the hunted, his life in the hands of a benevolent chimpanzee scientist... Winner of an Honorary Academy Award for Outstanding Make-up Achievement and nominated for two Oscars, (1968 Best Costume Design and Best Original Score) Planet of the Apes is grand entertainment from its visually arresting beginning to the chilling last moment. (Dir. Franklin J. Schaffner, 1968, 2.35:1 Anamorphic widescreen, Dolby Digital 5.1 Surround and DTS)

Planet Of The Apes: 2001 Special Edition (2 Discs): When contact with an interstellar reconnaissance missionis lost, astronaut Leo Davidson launches a rescue mission and lands on a jungle-like planet not unlike the Earth. Following his capture by apes and subsequent escape, Leo assembles a small band of defiant humans and sympathetic apes in an attempt to re-establish contact with home but Leo must leads a rebellion against an overpowering ape force that will result in freedom or complete annihilation...(Dir. Tim Burton, 2001, 2.35:1 Anamorphic widescreen, Dolby Digital 5.1 Surround and DTS)

Beneath The Planet Of The Apes (1 Disc) An earthling (James Franciscus) sent to find the astronauts of the original film discovers not only a world of intelligent, talking apes, but an underground cult of grotesque "humans" who are the survivors of a nuclear blast years ago. Unfortunately, these mutants worship a nuclear bomb, a weapon which not only is the centerpiece of their society, but can be detonated at any time...(Dir. Ted Post, 1970)

Escape From The Planet Of The Apes: In the future, the Earth is ruled by a race of highly-evolved simians who supplanted humans after a nuclear holocaust. But when the ape-led Earth is threatened with total annihilation, a trio of scientists journey backwards through time in order to prevent the catastrophe. Once in the human-led world, however, they find themselves hunted by a suspicious and fearful government desirous of making them the subjects of an experiment that could alter the course of human and ape events...(Dir. Don Taylor, 1971)

Conquest Of The Planet Of The Apes: In 1991, after an epidemic has wiped out the dog population, talking apes have become humans' favourite pets. Before long, intelligent ape Caesar convinces those of his kind to stage a massive revolt against the humans...(Dir. J. Lee Thompson, 1972).

Battle For The Planet Of The Apes: After the collapse of human civilization, a community of intelligent apes live in harmony with a group of humans, but a community of mutants try to conquer those whom they perceive as enemies. (Dir. J. Lee Thompson, 1973)

Planet Of The Apes TV Series (4 Discs): After their spacecraft travels through a time warp, two astronauts (Ron Harper and James Naughton) from 1981 crash land back on Earth in the year 3085 - a time when intelligent apes rule and humans have been reduced to servants or pets. Captured by the apes and sentenced to death, they are saved by a curious chimpanzee named Galen (Roddy McDowall). But now all three are on the run, trying to keep one step ahead of the gorilla army led by General Urko (Mark Lenard), who is determined to kill the renegades! All 14 episodes (including 'The Liberator', which never aired during the show's original 1974 run) are compiled on this 4 DVD set.

Return to the Planet of the Apes (2 Discs) (The animated TV show)1st time on ever on DVD!

When I saw this set I couldn't help but buy it straight away.

Firstly it's a limited edition, numbered set that is stored in a bust of an ape! How cool is that?

Secondly, this set would be worth it for just the original 'Planet of the Apes' movie on it's own but with all of the original movies, up to the Tim Burton reboot, as well as the television series AND the animated series makes this set absolutely essential.

The television series has a bit of a tint of 'Star Trek' and 'Battlestar Galactica' and manages to have some pretty hard hitting themes running through the 14 episodes. In fact I would have really liked to have seen some more to see where the characters where going to go.

The special features, while only for the two main 'Planet of the Apes' movies are so vast and informative, are absolutely superb! While I would have loved to have seen some special features for the later movies or even the television series, the features that are there are a sci-fi fans dream. Definitely worth the five out of five.

This set is absolutely essential. While it may not have the newest movie, that doesn't matter. I urge everyone to go out and get this set right now. It's really that good!
Movie 4/5
Picture 4/5
Sound 5/5
Special Features 5/5
Overall 18/20

Posted by Pat Scattergood at 12:38