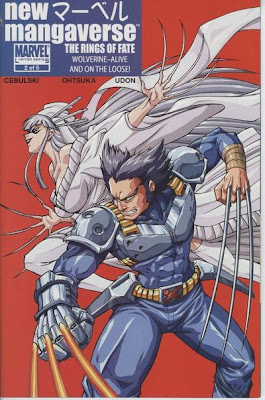 Someone is killing the Mangaverse's greatest heroes-and it's up to Spider-Man and the all-new Spider-Woman to gather together the survivors fight this unknown foe! Standing their ground on the ruins of Stark Island, the Fantastic Four, Iron Man and Daredevil make a last ditch effort-but even the arrival of Wolverine won't save everyone's life!

After the shocking first issue, I was incredibly eager to see where they were going to take the story.  What I wasn't expecting was for it to be even more shocking.

While the couple of deaths in the first issue were big, they weren't anywhere near as shocking as the numerous deaths in this issue.  You look at the characters involved and think "oh that's so and so, they'll be safe" and then bam, they're dead.  There are quite a few 'what the hell' level moments of shock.

The writing here has really ramped up the action and the story itself, revealing some extremely important clues to who is in charge of this massive act of war against the superheroes.  I also liked that they threw in a red herring too in the shape of an important super villain.  The ending here manages to outdo the shocker of issue one.  In fact, after a massive attack on Stark Island and a near massacre, the survivors notice what the ninja were actually after and it's a shocker big time!

The art work is just as good in issue one and if anything, even better in the fight scenes.  The artist really increased the sheer amount of brutality in the fights making the deaths of some of the superheroes really jump off of the page.  You're eyes are so busy looking at the detailing and beautiful artwork on the pages that when the deaths do happen it really does explode in a 'holy sh*t' kind of way.

All in all, even more exciting than the first issue and with some massively important advances in the story itself has made me very eager to read issue 3 just to see a) what is going to happen next and b) if anyone is actually going to survive this massive cull of characters.

Posted by Pat Scattergood at 13:03