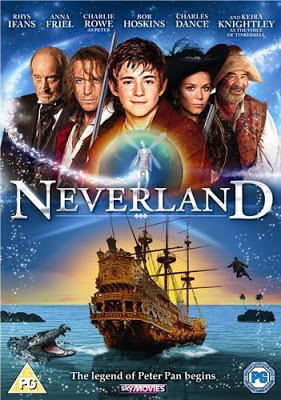 Raised on the streets of turn-of-the century London, orphaned Peter and his pals survive by their fearless wits as cunning young pickpockets.

Now, they've been rounded up by their mentor Jimmy Hook to snatch a priceless, some believe, magical treasure which transports them to another world.

Neverland is a realm of white jungles and legendary mysteries of eternal youth, where unknown friends and enemies snatched from time welcome the new travelers with both excitement and trepidation. These groups include a band of 18th century pirates led by the power-mad Elizabeth Bonny, and the Native American Kaw tribe led by a Holy Man, which has protected the secret of the tree spirits from Bonny and her gang for ages, and that has meant war.

But as the fight to save this strange and beautiful world becomes vital, Hook, Peter, and the ragamuffin lost boys consider that growing old somewhere in time could be less important than growing up, right here in their new home called Neverland.

Everybody has heard of the legend of Peter Pan whether it be the original novel by J.M. Barrie, the cartoon movie by Disney and the many various movie versions that have come out recently ranging from 'Hook' to the recent version of 'Peter Pan' right up to the movie 'Finding Neverland' about how the story was created.

Here, they do something new.  They've crafted a quality prequel that really gives a new layer to the legendary character.

In this two part mini-series first shown on the Sky One television channel, Peter is a young street urchin in the same mould as Oliver Twist.  Operating as a team of fearless pickpockets, the band are ruled over by James Hook, played with suitable menace by Rhys Ifans.

This four hour event does something rare for a mini-series.  There aren't any parts that seem to drag.  In fact, each part gives a new and interesting insight or piece of information about the characters.  There have always been some questions about Peter Pan's past and about the powers they all have at 'Neverland' and how they even travel from world to world.

Tinker Bell explains how flying works, how they found out they could use the power itself and I loved how they explained another way of travelling from world to world.  One of the great strengths of the writing here is that they don't give the information away straight away.  They always seem to wait until the right moment to give the right bit of information.

Cast wise, there are some truly fantastic casting choices.  One of the most surprisingly good choices is Charlie Rowe.  He really does a fantastic job as Pan and more than holds his own against the better known cast members.

Rhys Ifans is a superb choice as James Hook and watching him grown in to Captain Hook is an absolute joy to watch.  While I'm not a massive Ifans fan myself, he does a truly magnificent job.  Bob Hoskin's once again plays Smee and shows  that he really hasn't missed a step with his performance.

The only disappointing performance is that of Charles Dance.  It's not a bad performance by any stretch but it seems to be very hit and miss.  One scene he'll be the old Charles Dance that lives up to his reputation as being a great and legendary actor but then there are scenes where he just seems to be  there for a pay check.

All in all, ignore the zero score for the special features.  That's just because of the simple fact that there aren't any.

What we have here instead is a superb prequel that really fills in the holes in Pan's past without ruining the characters that we know and love.

With some fantastic performances and intelligent writing, this is a superb release that all Pan fans will really enjoy.