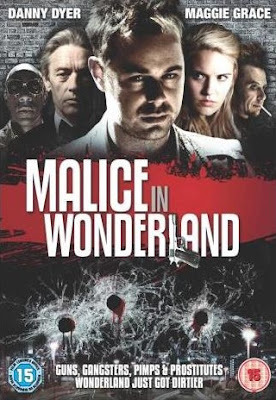 
Alice in an American law student in London. Knocked down by a black cab, she wakes with amnesia in a world that's a million miles from home - Wonderland.

We follow her adventures as she's dragged through an underworld filled with twisted individuals and the lowest low-lifers, by the enigmatic cab driver, Whitey. She needs to find out who she is, where she's from and use what wits she has left to get back home in one piece. As her journey progresses she discovers nothing is what it seems, realizes that fate and life are terminally entwined, and finds true love lurking in the unlikeliest place.

Review
'Alice in Wonderland' by Lewis Carroll has always been one of my favorite tales ever since I was a kid. There have been many versions of the story, some great and some absolutely awful. Some faithful to the source material and others that bear not even a glance at the original tale.

This one manages to be a completely insane, bombastic and insanely funny version of the tale all while being quite faithful, of sorts, to the story itself.

Danny Dyer, yes Mr Cockney Geezer himself, plays a version of the White Rabbit who is now a taxi driver called Whitey. After knocking down Alice with his taxi, it sets a whole series of random and exciting adventures in to movement.

I want to get one thing about this movie completely clear. If you are expecting the Lewis Carroll version or even anything remotely close then you will be crap out of luck.

However if you go in to this with an open mind and watch what is essentially a Cockney, drug fueled version of the old tale then that is exactly what you will get. It's fast paced, well acted and painfully funny.

Danny Dyer plays his normal Cockney self but in this movie it really works instead of just grating on the nerves. Matt King is another one who plays his part fantastically well.

The movie itself is full of nods to the Lewis Carroll tale and seems to hold the story in absolute reverence all while trying to make sure the movie has it's own voice.

It's obvious that the movie didn't have a very big budget at all but the director, Simon Fellows, has done a great job of using every penny to his advantage and it really shows here.

While it is true that I was gripped through the entire movie, I have to admit that it is a 'marmite' movie in that you will ever love it or hate it. For every person such as myself who loved every moment of this movie, there will obviously many that think it's a pile of crap.

I'd still highly recommend it however. It's definitely worth picking up and at the very least worth a look considering you can pick it up for mere pennies.
Movie 4/5
Picture 4/5
Sound 4/5
Special Features 2/5
Overall 14/20
Posted by Pat Scattergood at 09:50