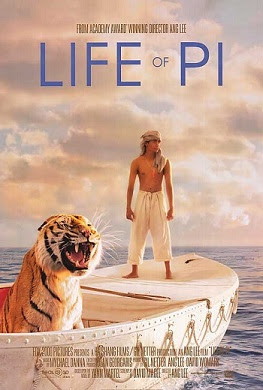 Based on the best-selling novel by Yann Martel, is a magical adventure story centering on Pi Patel, the precocious son of a zoo keeper. Dwellers in Pondicherry, India, the family decides to move to Canada, hitching a ride on a huge freighter. After a shipwreck, Pi finds himself adrift in the Pacific Ocean on a 26-foot lifeboat with a zebra, a hyena, an orangutan and a 450-pound Bengal tiger named Richard Parker, all fighting for survival.

Ang Lee has always been a brilliant director, although he sometimes has a bit of a habit of going for style over substance.  His movies have always looked amazing and that can over ride the story every now and  then.  Like in 'The Hulk' for example.

This movie is completely different.  Not only does it look absolutely amazing, it's got a very strong, heart wrenching story as well as an amazing cast that really make you care about the characters.

I'n not really sure how I can talk about this movie while doing it justice if I'm completely honest.  Storywise it's a film of two very well made halves.

The first is showing Pi growing up, living with his parents and watching him find various religions.  This is superbly done and written with a bit of a quirky sense of humor that really gives the character substance.  Along with the scenes between the writer and the now adult Pi, you really are drawn in to his life.

Then the second part hits you like a fist.  After a shipwreck, Pi is stranded alone on a boat with some other animals and the begins the adventure of his life.  Using every inch of will and his spiritual nature, Pi has to find some way to survive until he can get to dry land.

While normally, two halves that are poles apart like this, would make the movie massively disjointed  that's not the case here.  If fact, the two halves merge perfectly.  Watching the first part and watching Pi grow up really has an effect on later moments in the movie because of the simple fact that you are emotionally linked to him.  You care about what happens.  You will him to survive.  In fact, it's so well written that you get involved in the movie to such a degree that it's like being on an emotional rollercoaster.  I was moved to tears during many scenes.

The fact that the movie is so well written and quite frankly, is one of the most visually beautiful movies I've ever seen is secondary.  The movie is in fact, owned by the cast.

Pi is played by a variety of people to such a great degree that it's honestly just like we have watched him grow up before our very eyes.  They all have similar personalities and mannerisms.  The best of these by far is Irran Khan, who I recognised from 'The Amazing Spider-Man,  as the adult Pi and Suraj Sharma as the Pi that is stranded.  They give such powerful performances that I couldn't take my eyes off of them whenever they were on the screen.

I would also be amiss if I didn't mention the legendary French actor Gerard Depardieu, who has a very small part in the movie but it proves to be a very important one.  He plays it so well and uses the few lines he does have in such a way that the character sticks in your mind long after the movie has ended.

I honestly don't think I have done this movie justice in how I have written about it.  It's one of the most beautifully written and made movies I have ever seen and the entire cast give a set of performances that had me gripped for the entire movie.

Go see it and see it now.  I saw it in 3D, which added another layer to proceedings but I strongly believe that this movie is so good that it honestly doesn't need the 3D to be memorable.

Get to the cinema and watch this movie.  You won't be sorry you did.  Just be prepared to be moved to tears.