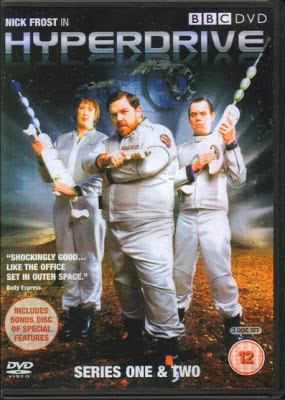 It's 2151 and the British have launched a fleet of space ships to explore the galaxy in the only way the British can... with a stiff upper lip and regular tea breaks. Their mission? To export all things British to all corners of the galaxy - namely overpriced supermarkets, housing estates, call centres and even tractors - and protect Britain's interest in a changing galaxy.

At the forefront of this expeditionary force is the HMS Camden Lock, helmed by the irrepressible, if a little tetchy, Commander Henderson (Nick Frost). Ably assisted by a crew of misfits, the Commander steers his ship through the stars, giving orders from his big swivelly chair.

Experience the highs, the lows, the anti-gravity failures, the annoying talking mops and, of course, the wars with alien races... always in national interest of course. Features the complete first and second series.

I am a massive science fiction fan and seeing as you guys and girls are here that you probably are too.  'Star Trek', 'Battlestar Galactica', 'Babylon 5', you name it I like it.

However, after seeing him in 'Spaced', 'Hot Fuzz' and 'Shaun of the Dead', I wondered where Nick Frost was going to end up next.  The answer is in space!

Take the original 'Star Trek' and mix it with equal parts 'Fawlty Towers' and you might have a bit of an idea of what to expect.

The humor is equal parts satire, spoof and gentle yet riotously funny on so many levels but also has a really gentle heart.

The best of the cast by far is the absolute nutcase First Officer York played with absolute menace and glee by Kevin Eldon.  He truly seems to relish his role and he gets some of the funniest moments, especially in the first series.

However that's not to say that the rest of the cast is inferior.  Far from it.  The relationship between Nick Frost's and Miranda Hart's characters is absolutely adorable with it's innocent nature and the way their characters bounce off one another all while the chaos reigns around them.

Dan Antopolski, who plays Technical Officer Jeffers, is an under rated character in the series and the friendship between him and Navigator Vine, played by Stephan Evans, is really good.  It really comes across as if they are best friends and the way they tease each other had me in stitches.

There are some great special features here as well.  Considering the the series only ran for two series and 12 episodes, the special features are really well thought out.  The ones involving Nick Frost himself, really make the series sound like it was a lot of fun to make.

All in all, a criminally under rated show with joke after joke that hit the mark.  More people deserve to have seen this one especially with such a great cast.  Hell, this series is worth it just for the absolute psycho of a First Officer.

Posted by Pat Scattergood at 14:47