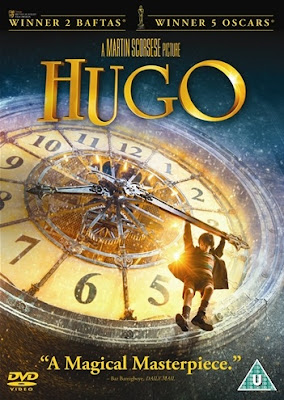 Hugo is an orphan, clock keeper, and thief living in the walls of a busy Paris train station, where his survival depends on secrets and anonymity. When his world suddenly interlocks with an eccentric, bookish girl (Chloë Grace Moretz) and a bitter old man who runs a toy booth in the station (Ben Kingsley) Hugo's undercover life and his most precious secret are put in jeopardy - whilst constantly having to hide from the threat of being sent to the orphanage by the unrelenting Station Inspector (Sacha Baron Cohen).

Review
Hugo is Martin Scorsese's first foray in to family movies and what a debut it is.

Based on the novel The Invention of Hugo Cabret by Brian Selznick, Scorsese has crafted a slow and methodical yet incredibly beautiful movie for all of the family. Originally shot in 3D, this version here is the standard 2D version.

Basically a small boy lives alone in a Paris train station after the tragic death of his father in a fire. He leaves a mechanical man to him and slowly but surely Hugo begins to rebuild it. During his time in the train station he meets a rather eccentric young girl who leads him on an adventure involving a treasure notebook, an old toy maker, a key, a cryptic drawing and a cinematic legend.

Told in a slow and deliberate pace, Hugo is a tale that absolutely grips you from the beginning frame right through until the very end. It has such a sense of wonder and magic to it that it comes across as an ode to the glory days of silent cinema and George Melies in particular.

This is one of the major pluses for me as a movie fan as the sheer amount of love that has gone in to making this movie is easily scene through the entire movie. No scene is wasted and nor any line of dialogue unnecessary.

Another major bright spot are the absolutely superb performances by the entire cast. The major breakout one being the young Asa Butterfield as Hugo who gives such a subtle and fragile performance that you can feel every emotion that comes from him. I for one wouldn't mind seeing him in more movies.

The best performance by the rest of the cast is, by far, Ben Kingsley. He gives such a masterful performance as Papa George that I, as the viewer, couldn't take my eyes off him whenever he was in the scene.

The special features here, like the movie, are absolutely spot on. They're interesting, sincere and really show the amount of love and effort that has gone in to making this magical movie. The making of in particular is a delight.

While it is true that the movie loses a little when it's not in 3D, it is still an absolutely amazing and beautiful movie to behold. I would highly urge anyone to watch it.
Movie 4.5/5
Picture 5/5
Sound 5/5
Special Features 4/5
Overall 18.5/20
Posted by Pat Scattergood at 09:28