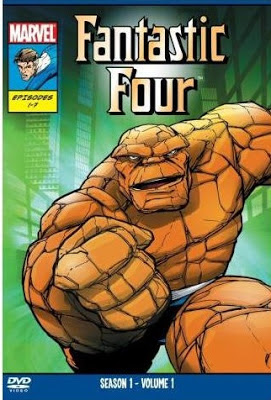 
From the awesome partnership of Marvel's Stan Lee and Jack Kirby comes an extraordinary team of super heroes with real-life personalities: the Fantastic Four!

First seen by comic fans in 1961, this DVD features the first seven episodes of the 1994 animated series.

It's clobberin' time for Reed Richards, Ben Grimm, Susan Storm and Johnny Storm, as the story of their origin is told. Then their battle to save the Earth arouses a horde of acclaimed Marvel characters including hero-villain Sub-Mariner, the godlike Galactus and his herald the Silver Surfer.

Review
Stan Lee and Jack Kirby created the Fantastic Four in 1961 and the team have appeared in many different guises since then.

This series, first aired in 1994 is one of those guises and while at the time the first season was given a bit of a mixed to negative reaction, I feel that was quite unfair. Except for the god awful theme tune. It seriously has to be the worst television theme tune I have honestly ever heard.

This series stays incredibly faithful to some of the early comic book stories and while it's true that there is a campy feel toit there was also a quite campy feel to the Stan Lee and Jack Kirby stories.

There were also a massive number of guest appearances from some major comic book characters from the Marvel universe such as Terrax and Firelord from the Guardians of the Galaxy, Galactus, The Silver Surfer, Super Skrull and even a random as hell but very funny cameo from the legend Stan Lee himself!

While I was really disappointed that there were no special features, I wasn't really that surprised either as some of the older Marvel cartoons such as this one, the X-Men and the Original Spider-Man cartoon didn't have any either.  There is a restoration comparison but that's the same as on the X-Men series so that doesn't really count.

While the complaint that this series is quite campy is definitely true I thought that it was a hell of a lot of fun. Plus the fact that it was really faithful to some of the earlier comics was a great plus for me, as a fan, as well. Definitely worth picking up considering how cheap it is although I will warn you about one thing.