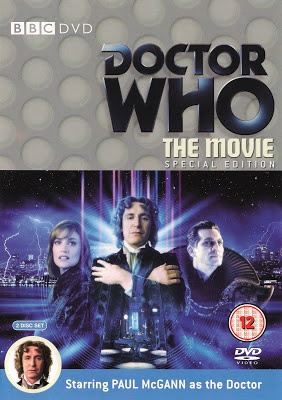 After being charged with taking The Master's remains back to Gallifrey, The Doctor discovers there is much more than meets the eye to the request by his once arch nemesis to transport him back to his home planet.

When he lands on Earth after a malfunction, The Master escapes and begins a plan to take over the world and destroy The Doctor for once and for all.

Will The Doctor be able to stop him or is the world that is eagerly awaiting the Millennium doomed?

I'm really not sure all that sure where to start with this one.  In the years since it's release 'Doctor Who: The Movie' has grown to cult status amongst the fans who once decried it as being awful and not even remotely close to the 'Doctor Who' that they loved.

I'm not really sure why the turn around in the opinion of the movie in all honesty.  It's inherently flawed on many levels, some major and some minor but the bad really outweighs the good in this one.

I'll be nice and start with the good things however.  Paul McGann as the 8th incarnation of The Doctor is a superb choice.  Mixing bitterness with an underlying sense of fun, think Tom Baker mixed with Christopher Eccleston and you have an idea of it, he played the part superbly.  In fact, I would have really loved to have seen more adventures featuring him.  It's such a shame however that he's stuck in such a poor movie.

Another thing I liked was the fast paced style of the movie that is really apparent in the new stories that have appeared since it's rebirth.  The good parts that were there were relatively exciting and that was due to the direction by Geoffery Sax.

However, that is where the good things end.  One of the things I absoutely detested was the weird ass version of the iconic Doctor Who theme.  It sounded like it would have been at home in a lift.

I really hated Eric Roberts as The Master, and in all honesty, the writing of The Master overall.  He gave a really stilted performance and, if I'm honest, he didn't feel like that much of a threat to The Doctor.  The writing also turned the character in to a weird, preachy snake like creature who would spit at people.  It was just weird and not in the slightest bit menacing.

The overall tone of the movie itself is a bit of a hit and miss one too.  Just as there seems to be any kind of tension or action building, they go for some really misjudged comedy.  It just makes it seem rather stilted and uneven.

However, the special features here really shine out for a Doctor Who fan.  There are some great features here and that has nearly always been a great selling point for fans of the long running television series.  The commentaries are really interesting.  To be honest, it's worth picking this one up just for the special features alone, although only if you can find it relatively cheap.

Posted by Pat Scattergood at 13:19