Doctor Who: The Eyeless by Lance Parkin Review 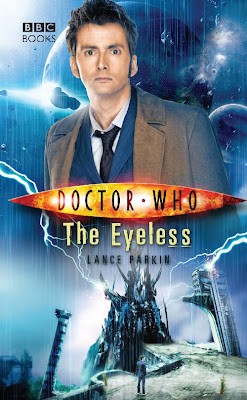 
In another of the bestselling Doctor Who novels, the Doctor battles a mysterious weapon on a barren, war-torn planet - and this time he's all on his own.

Arcopolis is a ruined city with only the Fortress left standing after a brutal intergalactic war. 15 years earlier, a mysterious weapon housed deep in that very building wiped out nearly the entire population of the planet. Only the ghosts of those lost remain.

Soon the Doctor arrives to put the weapon out of commission for good only to find he’s not the only one after the weapon itself.

The David Tennant era of 'Doctor Who' has always been one of my favourites both in the television shows and in the novels that came with them as most of the authors nailed the character superbly well.  Some of the books that came out during that era honestly stand up with a lot of the novels from the classic era too.

One of the main things I liked about this book is that it is incredibly easy to read. However that’s also one of its downfalls as well. Sometimes the simplistic nature of Lance Parkin’s writing doesn’t give the level of gravitas that an interesting story such as this one should have.

That’s really a shame because under the slightly ‘play it safe’ writing style, there is a brilliant story wanting to get out. In fact, it wouldn’t be out of place as an episode from the television series itself.  The problem is one that can simply be explained as the story looked awesome on paper but the execution of it was sorely lacking.

However that said, his writing does do one thing right. This story is set in the David Tennant era of The Doctor and he captures both the Doctors playful side and his angry, bitter side brilliantly well. Maybe that’s part of the problem. Maybe Parkin spent too much effort on getting the ‘Tennant’ style of the Doctor correct that he negated to make the other characters more than disposable.  The survivors on the planet just seem to be facsimiles of each other.  Whenever an interesting character that was different popped up, they either disappeared again without a trace or they were killed off.

There are some promising glimpses of hope for future stories however in the shape of the enemy named ‘The Eyeless’ who do come across quite well but they could have maybe been done slightly better by a writer with a slightly darker style perhaps?  If they were written by someone with a gritty style or even a cold, cynical style then they would have really come across as a real menacing character to add to the Doctor's list of enemies.

All in all, a rather disappointing story but with a good portrayal of David Tennant's version of the Doctor.