Doctor Who: The Angel's Kiss - A Melody Malone Mystery By Justin Richards 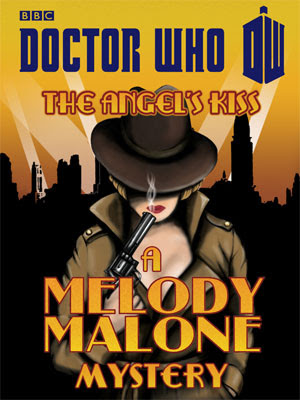 On some days, New York is one of the most beautiful places on Earth.

This was one of the other days…

Melody Malone, owner and sole employee of the Angel Detective Agency, has an unexpected caller. It’s movie star Rock Railton, and he thinks someone is out to kill him. When he mentions the ‘kiss of the Angel’, she takes the case. Angels are Melody’s business…

At the press party for Railton’s latest movie, studio owner Max Kliener invites Melody to the film set of their next blockbuster. He’s obviously spotted her potential, and Melody is flattered when Kliener asks her to become a star. But the cost of fame, she’ll soon discover, is greater than anyone could possibly imagine.

Will Melody be able to escape Kliener’s dastardly plan – before the Angels take Manhattan?

Many of you 'Who' fans out there will recognise the cover to this book straight away as it appeared in the series 7 episode 'The Angel's Take Manhattan' of the television show.

While it shares the same cover, the story here is best served as being described as being a prequel to that story and really adds some interesting details to it while still being a stand alone story.

Told under the pen name of Melody Malone, a name that River Song uses in the television episode, the story isn't your typical 'Doctor Who' novel.

In fact, it's a film noir combined with some thriller and science fiction aspects.  Some of the complaints I have read about this book is that the Doctor himself doesn't appear at all in the story but I honestly think that those people are missing the point of the story.

This isn't the Doctor's story.  Instead it is River Song's story and is told entirely from her perspective.  Justin Richards really nails the egotistical and sexualised nature of the character and some of the one liners she comes out with really wouldn't be out of place in one of the episodes that she appears in.

The story itself is a short but fast paced one and really grabs the readers attention from the start with it's authentic and classic private eye style writing.  While a couple of lines are groan worthy, it adds to the charm of the story.  It's exciting and interesting and acts like a link to the television series really well while standing on it's own two feet as a stand alone book as well.

Even if you aren't a Doctor Who fan, you may like the classic mystery style element to the movie.  All in all, an interesting and rather enjoyable tie in to a long running television show.