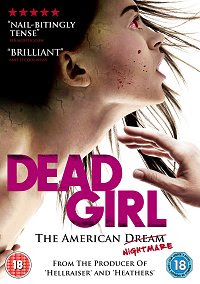 
Daring, original and utterly genre-busting, Deadgirl is a terrifying journey to the dark heart of America.

When teenage misfits Rickie and JT cut school one day, they find themselves in the derelict remains of an abandoned hospital.

The gruesome, unnerving discovery they make in the bowels of the facility will test the very limits of their sanity: a woman, naked, chained and covered in plastic. She's abandoned, she's beautiful, she's dead...or is she?

What follows is a warped odyssey that forces this pair of outcasts, their high-school tormentors and adolescent crushes to all decide just how far they're willing to stretch their understanding of what is right and what is very, very wrong.

From the producer of the seminal Hellraiser and the legendary Heathers, Deadgirl is a new genre classic and a no-holds-barred look at the horror of growing up. Starring Shiloh Fernandez (The United States Of Tara), Noah Segan (Brick), Michael Bowen (Kill Bill), and Candice Accola (Juno).

Special Features
Review
'Deadgirl' is in very much the same vein as the disturbing thriller 'Hard Candy' and much like that movie, some of the scenes in this movie will really stay with you long after the end credits have been and gone.

'Deadgirl' tells the story of two American high school students, who after deciding to miss school one day find an abandoned hospital. That's not the only shocking discovery. After exploring the building they find a naked dead girl chained up and covered in plastic. However all is not what it seems.

What follows is a deeply disturbing and stark movie that could pretty much be placed in to many different genres.

You could easily place it in the horror genre with some of the shocking scenes that bombard the viewer. However it could also be classed as a psychological thriller in that it explores the deep seated question of how far will one person go if they think they can get away with it?

Most of the characters here are completely disgusting in their actions and personalities and that's really forced to the front of the movie. That really creates a sense of supreme tension by making the viewer pretty much dread what is going to happen next.

The writing, while shocking, is incredibly intelligent in how it handles the story itself. Along with the direction, the movie feels grimy and dirty like you shouldn't be watching it and that really adds to the atmosphere of the movie itself.

The special features are pretty good for a low budget movie. The commentary itself is especially a highlight as well.

All in all, while not an easy movie to watch in the slightest, it still manages to be a very well made and acted horror / psychological thriller. Well worth checking out but make sure you have a strong stomach.

I also have to warn any viewers that there are some disturbing rape scenes in this movie as well so if you are squeamish about that sort of thing then I'd avoid it.
Movie 4/5
Picture 3.5/5
Sound 4/5
Special Features 3.5/5
Overall 15/20
Posted by Pat Scattergood at 00:57