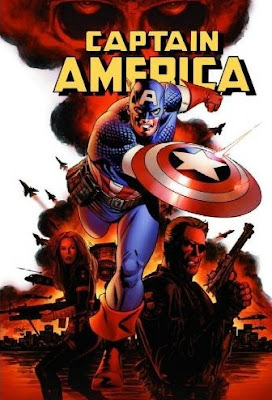 
The questions plaguing Captain America's dreams have been answered in the most brutal way possible!

In the wake of this brutality, General Lukin makes his first all-out assault.

Using someone from Captain America's past  to tear open new wounds and threatening to make new scars that may never heal!

After the effects of September 11th, the patriotic superhero Captain America kind of faded in the background for a while.  The stories tried to be respectful and relevant but they just didn't work without sounding jingoistic.

Then along the team of Ed Brubaker and Steve Epting to revive the characters in a shocking way.

When it was announced that they would be bringing back a long dead character, Captain America fans weren't afraid to voice their opinions about the decision. This characters death was a pivotal moment in the evolution of the Captain America character.

They needn't have worried so much. While some of the story does fall in to melodrama in places, it is an exciting and well paced tale with some absolutely shocking moments that will excite fans old and new.

I also like how even though that was the main story arc, there were other story arcs going on alongside it.  Not once did they make the graphic novel seem cluttered or disjointed.

The artwork here is absolutely spot on and some of the best I've seen in a Captain America release. Steve Epting is definitely improving with each of his releases that come our way.  I, for one, will definitely be checking out more of his work.

The only complaint I had, hence the mark of 3 instead of 4 for the writing, was the tendency to fall in to melodrama in places although the last third of the story more than made up for that.

Posted by Pat Scattergood at 15:18