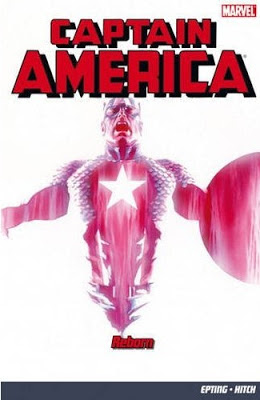 
Captain America is dead.  Murdered by the sinister machinations of his deadliest enemy The Red Skull!

Now, Steve Rogers' closest friends and allies have found a way to bring back the original Captain America.  Or have they merely discovered something more sinister?  As The Red Skull hatches his greatest plan to destroy the Sentinel of Liberty nears it's completion, will the legendary Captain America be lost forever or will he be reborn?

After reading the incredibly exciting saga of 'Thor: Reborn', I was chomping at the bit to read about the rebirth of Captain America.  One of the most iconic characters in the Marvel universe and he was going to get a bang up to date rebirth that would hopefully bring him back in to the public eye where he belongs.

I wasn't disappointed. While I will admit that it wasn't as good as the 'Thor: Reborn' graphic novel, this is still a superb addition to any Captain America fan's library.

The story flits between the past, the present and a glimpse of what the future may bring.  It kind of feels like it should be disjointed with a set up like that yet it isn't.

Set after the massive civil war that torn the Marvel universe apart, it really does well with dealing with all the aftermath without overloading the current story. Also new readers won't be lost because they do a fabulous job of doing a 'catch up' without it seeming to be a retread.  One of the things that I really liked was the fact that they showed that the heroes weren't heartless, they were hurting due to what happened to them all, they were grieving for their fallen friends.  It was great to see them as the heroes they are but with a bit of a more human side to them.

The various returns, twists and turns during the tale really do keep the readers on their toes. As do the massive battles that take place.  I really can't fault the action in this release.  They balance the slower scenes set forth for the character development with the blasting off the page style action brilliantly.  In fact, I would even go so far as to say they have found the perfect balance here.

That's not all however. This tale does a really good job of tapping in to the psychological state of Steve Rogers as well. It really shows the rage and the torment that he really struggles with.  It was really good to see a different side to Rogers, to see that he isn't perfect or unbeatable.  Not only was he fighting his enemies, he was fighting himself too.  The intelligent writing really made this side of the story stand out for me.

I can't fault the artwork by Bryan Hitch either.  The detail and the way he handles the detailing and then jumps straight in to the loud and bombastic battle sequences was absolutely masterful.  Also the covers by the (nearly) always brilliant Alex Ross are absolutely fantastic and a treat for fans of comic book artwork.

Posted by Pat Scattergood at 11:17