Arthur and the Invisibles DVD Review 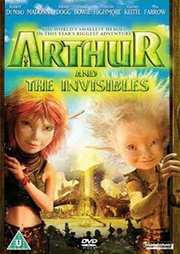 Adventure waits in your own backyard!

From the creative mind of talented filmmaker, comes a larger-than-life, family adventure about a boy who, after his grandfather disappears, sets out to save his family home from emerging real estate developers. Arthur learns that he must follow his grandfather's ancient clues to a vast treasure - and unlock the passageway to a spectacular new world filled with mysterious little people, so tiny they are considered invisible, and enlist their help. But once in the magical land, Arthur must join swords with a beautiful princess and a reckless army of defenders to save the land from the evil wizard. It seems like an impossible task, but as he discovers along the way, sometimes the smallest heroes can make the biggest difference.

Using a dazzling new combination of live-action and ground-breaking CGI technology, Arthur and the Invisibles is the story about the true meaning of courage and the endless power of imagination.

I have to be totally honest.  When my son was bought this as a gift, I had completely no idea what it was about because I'd never heard of it.  After looking it up online and seeing that it was directed by Luc Beeson, director of 'Leon', I had very high hopes for it.

For once, those hopes were spot on.

What we got here was a well crafted and exciting fantasy adventure that gripped not only my little boy til the end but also myself as well.

The story itself isn't the most original in the world.  It's part 'Honey, I Shrunk The Kids' meets 'The Borrowers' via a bit of 'Dark Crystal' but it is still well written and based on Luc Beeson's children's book.  While I can't tell you if it's true to the book or not, what I can tell you is that this story has a lot of exciting moments, romance and some great characters.

The cast for this, the English speaking version, is eclectic to say the least.  You have people such as Madonna and Snoop Dogg rubbing shoulders with legends such as Harvey Keitel and Robert Di Niro.  The best of the casting by far is Freddie Highmore, who gives a wonderfully sympathetic performance as Arthur, even bettering his good performance in the 'Charlie and the Chocolate Factory' movie and another legend.

Someone who is known to all us fantasy geeks out there for his wonderfully menacing but fun performance in the 'Labyrinth' movie.

That's right folks.  David 'freaking' Bowie is cast here as Malthazard and gives a menacing yet cynical vocal performance.  His voice over work here was spot on and really made the character incredibly memorable.

I'd be a bit of a rubbish reviewer if I didn't mention the legend that is Mia Farrow as well.  She plays Arthurs grandmother and gives a real touch of class and dignity to a character that while she doesn't say that much, compared to the other characters, she's definitely memorable as always.

The only part that I didn't like were the characters voiced by Snoop Dogg and Anthony Anderson.  While I'm not of the view that the characters were racist, I just didn't think they were all that good or well written.

The special features here are pretty good with my personal favourite being a beautiful song performed by the criminally under rated singer, Jewel.  I would have liked to have seen a little more in the way of a 'Making of' but that's a small gripe.

All in all, while not a perfect family movie by any stretch of the imagination, it was still a massively entertaining and exciting fantasy movie that more than kept my sons attention.  That's all I really ask for in a family movie and that's what I got.

Apparently there were two sequels made as well so I will definitely be on the look out for those.

Check it out, especially considering that it's so cheap and easily available.

Posted by Pat Scattergood at 12:47