Are You Ready?: The Unauthorised History of DX Review 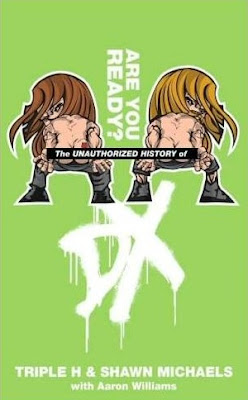 D-Generation X, or DX as they came to be known, was headed by Triple H and Shawn Michaels, two of the biggest Superstars in wrestling history, and had a changing roster of rebels who did whatever they wanted, whenever, wherever -- regardless of the ultimate outcome.

First created in 1997 as a means for two friends to work together, the faction rapidly grew so popular with audiences and fans that other wrestlers were clamouring to join it.

Their anti-establishment, authority-busting attitude was key to their appeal and they were instrumental in the success of WWE over the rival WCW, occupying a special place in the hearts and minds of wrestling fans to this day.

Different incarnations of DX followed -- but always with Triple H and Shawn Michaels at their centre. DX were notorious for speaking their minds, no matter whom they provoked or how. Told by the men who created DX, this is their inside story.

Triple H and Shawn Michaels, known collectively as DX or D-Generation X, have always been known to divide wrestling opinion. Some see them as integral to creating a more realistic form of wrestling and others seem them as immature jackasses.

I've always been quite a fan of watching their matches but not so much of their buffoonery that seemed to take over each episode of Raw and Smackdown that they appeared on.

Despite all of that, I really did enjoy this release for the most part. Written partly in character and partly in real life, it does come across as a little disjointed in places.

While I do understand that this book is basically just about the history of the wrestling stable, I still found it quite annoying that they really either glossed over or ignored completely major parts and some of the members.

I accept that's due to just being about Shawn and Triple H's time in DX but they start to go in to detail about their solo careers and then their feud together before stopping suddenly.

This release really does do a very good job of bringing back some memories of really good matches and interviews and even helped me to remember a few moments I'd forgotten. The jokes between Triple H and Shawn Michaels border from being very funny to being really annoying.  I suppose that's part of the charm of the group itself.  The juvenile and, most of the time, funny jokes and put downs.

While the book itself is well written and entertaining in places, I'd just recommend this for the fans of DX themselves.