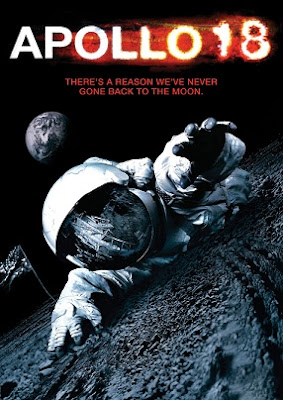 Decades-old found footage from NASA's abandoned Apollo 18 mission, where two American astronauts were sent on a secret expedition, reveals the reason the U.S. has never returned to the moon.

Two things got me really excited when I found out about this movie.  Firstly, it is produced by Timur Bekmambetov.  He of 'Night Watch', 'Day Watch' and 'Wanted' fame.  At the very least I expected a very exciting and well made movie.  Secondly, the idea behind the movie itself sounded very interesting and in all honesty, spooky.  As we all know, I love a spooky movie or two.

What we got was neither of those things.  We got a movie that is actually quite hard to review.  It's neither awful, except for that ending, but neither is it good either.

The cast do their very best with the dialogue itself, making good use of what little back story the characters do have.  I would have liked to have seen a little more of the characters just so maybe I would have cared about them a bit more than I did.

One of the things I really hated was how it had been filmed.  Now I know that this is a 'found footage' movie but some of the scenes were so dark and badly thought out that I couldn't see or work out what was happening in the scene.  Considering this genre of movie works on building up tension and scares, that's pretty poor.

That's not to say that it didn't have some scares.  While they weren't the most original scares in the world, or in this case space, they did make some good use of the settings and of the sound effects to create some tension and dread.

However, and I know it has been spoken about countless times by other critics, but the ending completely blows the movie for me and really takes it down marks wise.  After building the tension, for an ending that was so completely disportionate to the movie and that seemed completely out of left field to happen ruined the movie.  That's a real shame because even though it wasn't the best movie in the world, it was still better than some of the other found footage movies out there.

The special features, while a good selection of deleted scenes and alternate endings as well as a commentary, don't really do that much to improve the quality of the movie.  That said however, it was interesting to see what other directions they could have taken the movies characters.

All in all, I'm not really sure that I can recommend this movie because of the simple fact that some of the scenes were really badly done and that ending add up to make a movie that really didn't live up to the hope that I had for it.

Posted by Pat Scattergood at 07:05