Angela and the Baby Jesus by Frank McCourt 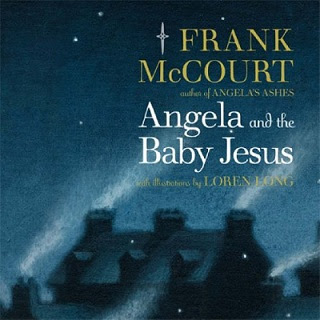 
A beautifully illustrated Christmas story from one of the world’s most loved writers.

In ‘Angela and the Baby Jesus’, McCourt revisits his mother’s childhood. Set in Limerick at the turn of the century, ‘Angela and the Baby Jesus’ is the story of the Christmas when Angela was six and concerned about the baby Jesus on the altar of St. Joseph’s Church near School House Lane where her family lived. The story is written in the voice in which Frank McCourt’s told his internationally bestselling and award winning ‘Angela’s Ashes’. The story is illustrated by Loren Long. Like Dylan Thomas’ ‘A Child’s Christmas in Wales’, it is for readers of all ages.

Frank McCourt has been known as one of the most beloved writers of his generation and rightfully so.  His style of writing that is so poetic and prose like that it just flows off the page and really grips the reader early and doesn't let up.

It's exactly the same here with this children's book.  Told autobiographically as a story that involved his mum when she was a small girl, it tells the tale of Angela being worried that the model of the baby Jesus in the crib was real and that he was cold.

The story is so endearing and gentle that as well as gripping my little boy, it gripped me as well.  As I was turning the pages and reading to him, I wanted to find out just where the story was going to go next.

That's not the only thing that I absolutely loved as well.  The illustrations by Loren Long are absolutely gorgeous and, if I'm completely honest, worth buying the book for alone.  They have a lovely gentle feel to them and I will definitely be on the look out for any of Long's other work after seeing this release.

Released as a Christmas story, it would be a real shame to dismiss it as just that.  In fact, it's got so many more layers than that.  It's a gentle story of a young girl's quest to ensure that small statue of Jesus that she see's in her local church is warm in Christmas time.

I would honestly recommend this to anyone wanting a good and gentle story to read their little ones.  It's so gentle and well written that it will grip children of all ages and even their parents.

Posted by Pat Scattergood at 04:22