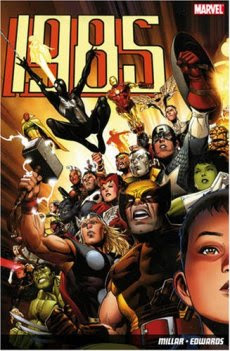 1985, published by Marvel Comics, is a unique look at the Marvel Universe through the eyes of writer Mark Millar and artist Tommy Lee Edwards

The most powerful super-villains in the Marvel Universe gather their might to wreak havoc in the one place they've never before set foot - the real world!

As mankind's enemies cut a swath of destruction with unprecedented ferocity and ruthlessness, the fate of the planet rests in the hands of one person: Toby, a 13-year-old boy who holds the key to uniting his comic book idols - the Marvel heroes!

The year is 1985 and suddenly the Marvel super villains manage to gather together to wreak havoc in the real world, the one place they’ve not been to before. Only two people can stop them and that’s a 13 year old boy named Toby and his father, who could hold the key to victory.

I’ll start by admitting I am a huge Mark Millar fan. That’s probably why I was slightly disappointed with this release. After reading the brilliant collections, ‘Kick-Ass’ and ‘Wanted’, this one for some reason fell a little flat.

The writing, while good, just wasn’t up to his normal standard despite the really interesting premise to the story.   There are a few moments where the story builds up the tension making you think something big is going to happen but then doesn't seem to go anywhere.  It's kind of like they had too many ideas at the same time and couldn't finish them all.

I also like how they seemed to give both the heroes and the villains a bit more of a character to them all instead of just being the stereotypical good buy / bad guy style that’s normally in comics. I also like how the normal, everyday characters are also quite well fleshed out.

The art work however is absolutely brilliant. The use of shadows and slow reveals is absolutely masterful.  Despite all of these great things, for some reason, it just didn’t grab me as much as I thought it would.

Maybe I’ve been overly spoiled on his other work perhaps? However it is still a relatively good addition to a comic lovers collection.