The Rewakening (The Living Dead Series: Book One) by Joseph Souza Review 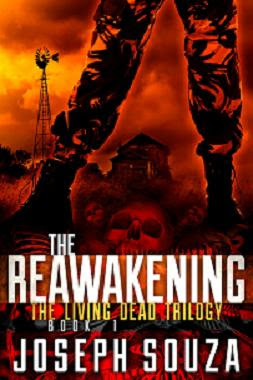 When a virus infects both humans and animals turning them in to flesheating zombies, Dar and her father, Thom, find themselves fighting for survival.

Maine.  Famous for giving us the legendary horror writer Stephen King.  Now another horror writer has come to steal his crown but has he succeeded with this story of zombies and a killer virus.

The writing here is fast paced and exciting with flashes of extreme violence amongst the group of random people all thrown together in an effort to stay alive.

Character wise Joseph Souza has stayed away from the cliches of having all the characters be heroes who just happen to be able to be able to protect themselves, can shoot expertly and are brave in teh face of absolutely everything the world will throw at them.  It's the complete opposite here.  Characters are arse holes, they make mistakes, they cause the deaths of other members of their party, there are moments of extreme cowardice.

As a reader, I found that to be completely refreshing.  Zombie fans have really given this book a complete battering reviews wise because of certain liberties Souza has taken with the idea of a zombie plague.  There are zombie animals, hybrids and everything inbetween and they hated that with a passion yet, while not all of the ideas work, they give the story a unique voice.  Considering how crowded the zombie genre is, I found that to be a breath of fresh air.

The pacing is superb.  Story wise, it cracks along at a breakneck speed and yet Souza still finds them to give the characters backstories, although some of them have mysterious pasts that weren't really explored that much but that will probably come in the next book as this is book one of a proposed trilogy of books.

While not in the same sphere as Stephen King, who quite frankly is a legend, this is still a superbly paced and exciting story with some rather unique ideas.