The Pratchett Portfolio: by Terry Pratchett 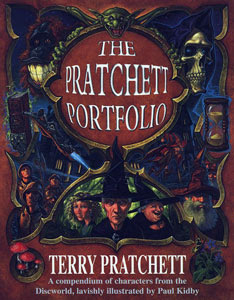 The characters range from Rincewind right to Greebo, the rather human cat and are all illustrated in both sketches and colour drawings.

As a massive fan of the 'Discworld' novels created by legendary fantasy writer Terry Pratchett, this is an absolute treasure trove of images and little backstories.

The illustrations by Paul Kidby are absolutely spot on.  In fact, after reading this and then going on to read a couple of Pratchett's 'Discworld' novels, I now can't read them without imagining the characters looking like the pictures in this book.

The writing, as always for Terry Pratchett, is fabulous.  Using his normal mixture of fantasy and his sardonic sense of humour, the little bits of writing describing the characters are absolutely hilarious and really inspire the reader to go out and find the 'Discworld' novels themselves.

All in all, I'm rating this highly as I am a massive Terry Pratchett fan and absolutely love the 'Discworld' novels.  If you don't like them yourself then to be honest, this won't be the book for you.

However if you are a fan or know someone who is, then this is a marvellous collection from a fantastic artist and a legendary author.