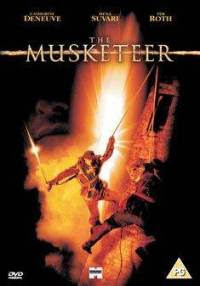 In a world threatened by war, one man rises to avenge the brutal murder of his parents by Febre, the man in black.  With impressive fighting skills, he finds a place in the disgraced Three Musketeers and runites them to bring justice to the streets of France.

I have always loved movies based on the 'Three Musketeers' novel by Alexandre Dumas so when I heard this one was in the pipeline I was excited and saw it at the cinema with my father.

The was over ten years ago and now, I figured I'd grab the DVD for next to nothing to see if it was as good as I remember it being or if that was just the rose tinted glasses doing the talking.

Well, after watching it again I was struck with a thought.  This really isn't a very good movie in the slightest.  The story is lacklustre at best and awful at worst.

The dialogue is incredibly stilted and delivered by the cast with about as much charisma as a wax crayon that has been left on a radiator.

With an impressive cast like this, I was expecting a much better set of performances than what we actually got here.  In fact, the movie is pretty much full of performances that would be laughed out of an amateur drama club.  The only person in this movie that even remotely gave a good performance was Tim Roth, who gave a wonderfully menacing performance as Febre, the man in the black.

The special features are mediocre and really seem happy to congratulate themselves on a great movie.  I'm not actually sure they're talking about this movie because this one sure as hell isn't a great movie.

While the stunts are impressive, I still wasn't all that impressed.  They seemed more suited to a kung fu movie than a Musketeer movie and just seemed really out of place.

All in all, I would avoid this one unless you truly are a glutton for punishment.  I remember this movie being a hell of a lot better than it actually was but that's down to the simple fact that it was one of the last movies I got to see with my Dad so it was definitely remembered with rose tinted glasses.

I would even say that this movie isn't even so bad it's good.  It's just plain bad and even worse, boring.