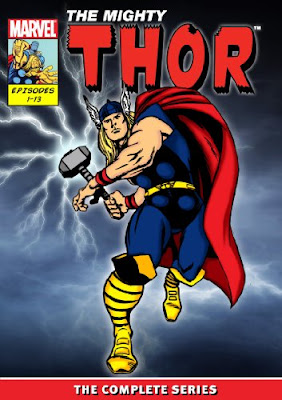 Don Blake accidently struck an old walking stick and magically transformed into Thor, the Norse God of Thunder and Lightning. This loved 1960's animated Marvel classic series follows the adventures of The Mighty Thor as he battles the enemies of the earth.

I've always had a soft spot for the 1960's Marvel cartoons and this one's no different.  In this one, Thor sets off on a series of adventures in the modern world and has to fight enemies such as Loki, who all want to destroy him.

While not as good as the 'Spider-Man' series from the same ere, Thor still has some great moments.  The stories featuring Loki being a definite highlight for me.

The main problem I had with the series was the simple fact that it seem to contradict itself more than once with major things such as Thor's powers, certain characters pasts and other such things that really should have been kept the same throughout the series.  I'm always bugged when a series has bad continuity but it's not too bad here.  Just enough to get noticed but not enough to ruin any enjoyment from the series.

The animation has dated quite a bit but what can you expect from an animated television series from over 40 years ago?  The stories themselves are very much in the 'Stan Lee' era style and I like that.  The guy is an absolute comic book legend and so he should be.  Without him and people such as Jack Kirby, both of whom have a series writing credit for this show, we would have most of the superhero characters that we take for granted today.

Sadly there are no special features here, hence the low score.  In my opinion, a television this old nearly never has special features so ignore the fact that there aren't any.  This is a great, albeit slightly dated, television series that would be a great starting place for new, younger fans and a great blast from the past for us older fans.