The Legend of Sigurd and Gudrun by J.R.R. Tolkien Review 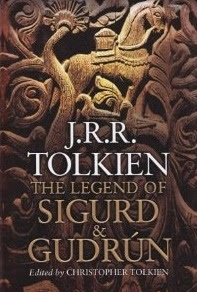 
The world first publication of a previously unknown work by J.R.R. Tolkien, which tells the epic story of the Norse hero, Sigurd, the dragon-slayer, the revenge of his wife, Gudrún, and the Fall of the Nibelungs.

Many years ago, J.R.R. Tolkien composed his own version, now published for the first time, of the great legend of Northern antiquity, in two closely related poems to which he gave the titles The New Lay of the Völsungs and The New Lay of Gudrún.

J.R.R. Tolkien is quite rightly seen as the father of the fantasy genre after creating such classic works as 'The Hobbit', the 'Lord of the Rings' saga amongst others.

Here he has taken two legends from Norse mythology and written two poems that are pretty much his take on these legends. Before now they were previously unpublished but the curator of Tolkien's estate, his son Christopher, has not only released these poems but also added his own commentary.

While the commentary itself was interesting it was more about his father than about what is written here.

Wisely J.R.R. Tolkien decided to write the rest of his work in his now famous prose. Here he deliberately uses incredibly archaic language yet it is still well written. It is Tolkien after all. Yet it just doesn't flow. I'd even go so far as to say it's a very stop / start take on the old Norse legend.

That said, what is here is a little bit like reading a synopsis of a movie. You know what is going on but there isn't a whole lot of depth or detail there. Some of his choices of things to omit from the legend itself were strange to say the least considering some of those omissions were very pivotal to the legend itself.

All in all, this one is definitely for the hardcore fans not the casual fans out there. While the language here is beautifully written, which is always the case with Tolkien, the omissions and editing makes it incredibly disjointed in places. Also the commentary, while interesting, just feels like it's been used to pad out the whole thing in order to be able to release it in book form.

Posted by Pat Scattergood at 14:55