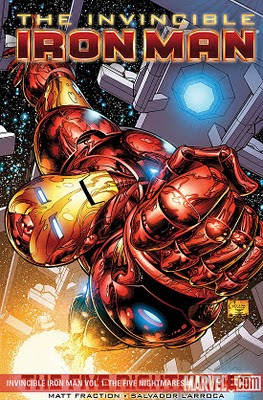 
Tony Stark - Iron Man, billionaire industrialist, and director of S.H.I.E.L.D. - faces the most overwhelming challenge of his life. Ezekiel Stane, the son of Tony's late business rival and archenemy Obadiah, has set his sights, his genius, and his considerable fortune on the task of destroying Tony Stark and Iron Man. What's worse, he's got Iron Man tech, and he's every bit Iron Man's equal and opposite, except younger, faster, smarter - and immeasurably evil!
Rising star writer Matt Fraction (Immortal Iron Fist) and superstar artist Salvador Larroca (Uncanny X-Men) join forces to repulsor-ray your comic books to a cinder!

Although I am a fan of Iron Man and have been as a kid, I have found that the recent Iron Man stories seem to be quite hit and miss. For every great story there's one that's either disappointing or very over rated.

The story here is incredibly hard hitting and definitely not one for the younger fans amongst us. While it does deal with the terrorist theme but it does so without being cliched at all. There are real reasons for all the attacks and the characters are fully fleshed out instead just being faceless terrorists.

The relationship between Pepper and Stark also takes on another level and even takes a shocking new direction. For once Pepper was used as a main character during the story instead of just being a 'will they won't they' sideline.

Another thing I liked were the appearances by Thor, Spider-Man and Reed Richards were used really well and without them feeling forced.

The art is absolutely superb except for one surprising part. The cover from Joe Quesada. Next to the fantastic artwork inside the release, the cover just felt really sterile and boring. Considering who drew it as well makes that a massive disappointment. The rest however really was great.

Definitely a very highly recommended release. Read this now even if you haven't read an Iron Man story before. It really is that good.