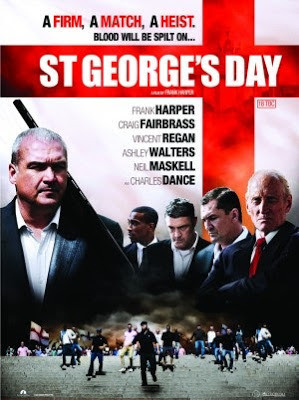 Synopsis
'St George's Day' is a British crime thriller that follows the story of infamous gangster cousins Micky Mannock and Ray Collishaw. Having long since graduated from the terraces they now run the top firm in London. But when they lose a drug shipment belonging to the Russian Mafia, a turf war threatens to tear their empire apart.

Their only hope is a potential heist in Berlin that'll clear their debts and set them up for life. Pursued by the Russians and the police they travel undercover with a huge English super firm who are heading across to watch the 3 Lions play Germany on St George's Day. While the police are diverted by the England and German firms going head to head in the mother of all battles, Micky and Ray have one shot at the heist that could save both themselves and everything they've ever fought for. But they hadn't counted on a grass at the heart of their firm whose sole intent is to bring them crashing down.

British gangster movies.  There have been hundreds of them since 'Lock, Stock and Two Smoking Barrels' hit the headlines and the long line of movies doesn't appear to be ending any time soon.

However, if this movie is anything to go by then maybe it would be more humane to stop making this sorts of movies now.

A quick trip to the IMDB website worried me with the sheer bile this movie has gotten from both amateur critics and professional ones but then I sat back and figured one thing.  It really can't be that bad.  Can it?

The simple and short but not very sweet answer is yes.  It really can be that bad but let's start with the positives of the movie shall we?

The scenery and settings of this movie were brilliant and actually, very well shot for the most part and really gave the movie a realistic and gritty feel to it.

Need more positives?  Sorry, there are none.

A movie lives and dies on it's cast and this one dies quicker than a snowman in the Australian Outback.  The entire cast seem content to go for every single British gangster movie cliche that has ever been used in a movie.  You could take these characters out of this movie and put them in to a different movie from this genre and you would honestly not tell the difference.

Also, the cast give some truly awful performances.  I would at this point normally pick out Nick Moran for his bad performance, which seems to be his 'thing' at the moment, but for once he isn't the worst performance here.

Oh no, that gem of an award goes to Keeley Hazell as Peckham Princess.  I honestly thought that Kristen Stewart in the 'Twilight' movies was wooden and had little to no emotional range but Hazell makes her look like Laurence Olivier.

The writing seems to consist of two words put in to sentences at random two second moments.  Those words are the 'f-bomb' and another word for a man's testicles.  If you tried to take part in a drinking game where you had  to take a drink each time these words were used then you would be wasted within about 10 minutes of the movie beginning.

The direction by Frank Harper, who also gives a very boring and monotone performance as Mickey Mannock, seems to have been in two minds as to what kind of movie he was making.  One moment there are tons of ill fated attempts at humor and parody then massive bursts of sex and violence.  It made the movie not only disjointed but nearly unwatchable for me.

All in all, I would massively avoid this new addition to the British gangster movie family.  It's nothing that you haven't seen before.

Available to buy on DVD and Blu-Ray from December 26th 2012
Posted by Pat Scattergood at 11:16