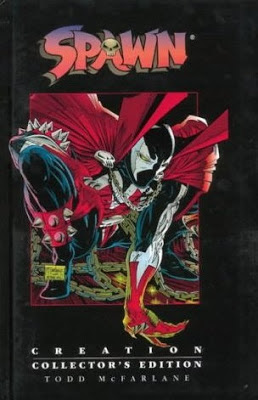 
From award-winning writer/artist, Todd McFarlane comes a demonic creation with a blood-soaked past and a new afterlife as the most tortured anti-hero of them all...Spawn!

Al Simmons has been to hell and back. Literally! A former government agent, he died violently. But five years on he finds himself alive once more, altered beyond all recognition and possessed of dark and demonic powers. Simmons, desperate to see his beloved wife, has made a deal with the devil! Trapped between the living and the dead, between light and damnation, Spawn must try to piece together his own shattered memory.

For 20 years 'Spawn' has been a legendary figure in the comic book world along with his creator, Todd McFarlane and rightfully so.

The stories have always come across as fresh and exciting, while at the same time adding more and more to the mythology of the character without drowning the reader in details.

Here, in this deluxe edition, is the origin story of one of the most original and multi-layered characters I have ever read. Add an exclusive introduction by Todd McFarlane along with a short history of Spawn himself and you have an essential purchase.

The stories themselves are exciting and really ramp up the pressure felt by Al Simmons / Spawn, while he starts his quest to get his memories back as well as work out what has happened to him. The characters are introduced in such a way that they feel like they have always been there yet with each passing page, a little bit more information about them is revealed. For want of a better analogy, it's a little bit like unwrapping a gift.

The artwork itself is almost like a separate character entirely and that really helps the stories come to life. The city scapes, the characters, even the weather are drawn with such clarity that it's almost like watching a movie unfold in front of your eyes.

All in all, the quality of the stories and the art, along with the little extras that they have thrown in make this not only a great introduction to one of the best written characters in the comic book world but an essential purchase for all comic book fans.

Posted by Pat Scattergood at 15:22