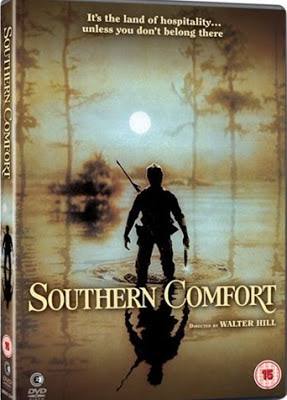 
A routine training exercise in the Louisiana bayou becomes an all too real war of attrition when a unit of brash National Guardsmen unwittingly upset a group of local Cajun hunters.

Lost in unknown territory and armed with little more than blank ammo, the weekend soldiers face a terrifying battle for survival against an unforgiving enemy hidden deep in the heart of the swampland.

Special Features
Review
On a routine training exercise a National Guardsman plays a prank on some of the Cajun inhabitants by firing blanks at them. Suddenly the training exercise turns all too real when they start getting taken out one by one by the brutal and maniacal Cajun hunters that they fired at.

Walter Hill has written, produced and directed some classics during his career and it's no different here.

'Southern Comfort' is a dark, brutal and psychological thriller from a director that definitely knows how to make scenes stay in the mind long after the end credits have rolled.

Unfairly over shadowed by the, in my opinion, inferior 'Deliverence' when released, it would be wholly unfair to compare the two. While they do have similar settings and both use the idea of crazy inhabitants hunting down people, that's where the line ends. Walter Hill has created a movie with a fast pace, a great taste and a truly fantastic soundtrack by long time Hill collaborator Ry Cooder.

In fact, the soundtrack itself is used sparingly but when used the music seems perfect for the scene. Cooder and Hill seem to use the music as another character to ramp up the discomfort and dread felt by the characters and the viewers.

The special features here are counted as just the one interview with Walter Hill but it's a very good one. The only quite private director gives a 45 minute insight in to the movie, the story and pretty much everything in between. While it would have been nice to have seen more features, it is most definitely a case of quality over quantity here.

While it is true that the brutality of the movie may put some viewers off, I definitely recommend that people at the very least give this 1981 classic a try. You have a gripping storyline, a great soundtrack, a cast that gives uniformly great performances especially David Carradine and Powers Boothe and a director that really knows how to get the most out of his actors and settings.