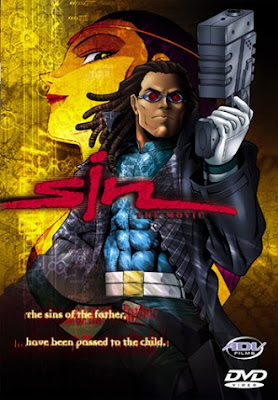 
Enter the world of Sin. In the 21st century, the city of Freeport Teeters is on the verge of collapse. The twin tides of rampant crime and ruinous graft face but a single barrier, an elite strike-force labeled Hardcorps.
Lead by Colonel John Blade, they have become a fierce fighting for justice in Freeport.
Blade must now unravel a series of mysterious unexplained kidnappings. An elaborate puzzle unfolds as he delves into the decadence of the city, and at its heart is Elexis Sinclaire. A brilliant biochemist, unscrupulous businesswoman, and merciless vixen, Elexis will stop at nothing to achieve her monstrous goal: to bring about the evolution of mankind!

Special Features
Review
'Sin: The Movie' is loosely based on the PC game of the same name and while it does take a few liberties with the material, it's actually a pretty enjoyable anime movie.

The first anime movie to be completely funded by the ADV company is a fast paced action full of guns, guts and mutants. The differences from the source material, while quite big changes like a character now being a cyborg and another character who is important in the game is killed off in the opening moments, don't really affect the story all that much. The interplay between Blade and Sinclaire is really good and I did enjoy the motives for her actions actions.

The story isn't super original but it does show flashes of brilliance. In fact I think the best way to describe this release would be that you would enjoy it if it was on but you wouldn't go out of your way to watch it.

The voice acting is pretty good in itself but no spectacular, which is pretty much the life story of the movie. It's a good, solid movie but not one that is particularly memorable.

The special features aren't very good on this one. Just a trailer and a couple of incredibly short behind the scenes things and some sketches. None of them really grabbed my attention.

If you are looking at starting an anime collection or to beef out the collection you already have then you could do a lot worse than this release.
Movie 3/5
Picture 4/5
Sound 4/5
Special Features 2/5
Overall 13/20
Posted by Pat Scattergood at 14:43