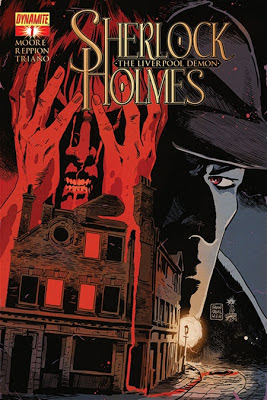 After solving yet another crime, Holmes and Watson decide to stay in Liverpool a little longer after a massive storm delays their departure.  A brutal murder later and the pair may be about to embark on an investigation that could lead them in to the world of the supernatural.

In all honesty I'm not all that familiar with Moore and Reppion's work on their previous Sherlock Holmes tale 'The Trial of Sherlock Holmes' so this is as good a place to start as any other.

The cover by Francesco Frankavilla most definitely sets the tone for the rest of the issue with it's dark reds and gothic grandeur.  Looking at this cover it's easy to see just why he won the 2012 Eisner Award for Best Cover Artist.

The story itself is quite slow paced and that really helps with the story.  It gives the characters time to breathe, which for a Sherlock Holmes story is vital.  Dialogue wise, the words just flow from the characters and really give the story a realistic air of the time period that they have set the story in.  They use the surroundings superbly and the shocking murder at the end of the story really packs a punch thanks to the pacing.

If you were to just look at the comic without taking note of the little details that the writers use so well then you would be missing a massive part of the story.  You would come away thinking not a lot had happened and that would truly be a shame.  If you read between the lines and pay sharp attention to the dialogue you will notice that the seeds for the next issue have been superbly sown.

The artwork is another plus for this issue.  Much like the cover, it has a dark gothic grandeur that it combines with the setting and the shadows superbly well.  The use of dark colors is fantastic and well realised so that when you see the blood from the murder or from the criminals attempt at escaping at the beginning of the issue, it really packs a wallop as my father would say.

All in all, this is a great first issue and I can't wait to see where all the little details are going to go in the next issue.  A great take on the Sherlock Holmes / Dr Watson characters really make this an issue worth checking out.