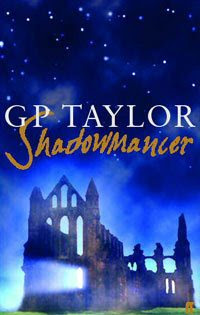 'Shadowmancer' takes you on a journey in to a world of superstition, magic and witchcraft, where the ultimate sacrifice may even be life itself.

Obadiah Demurral is a sorcerer who is seeking to control the highest power in the universe.  He will stop at nothing.  The only people in his way are Raphah, Kate, Thomas and the myserious Jacob Crane.

Packed full of history, folklore and smuggling, this tale of their epic battle will grip young and old alike.  The thrills, suspense and danger and guaranteed to grab the imaginations to the limit.

When first released, 'Shadowmancer' was tipped as the next 'Harry Potter' but I think that was a really unfair comparison because they are completely different stories and characters.

Here, G.P. Taylor has crafted a really fast paced supernatural adventure that has some absolutely fantastic characters.  They all have separate motives for their actions and has backstories to add different layers to their personalities.

Obadiah Demurral is a menacing and purely evil character and is written in such a way that he really gets under the skin of the reader.  The relationship between him and the others characters really does make the skin crawl.  However the best character by far is the mysterious smuggler named Jacob Crane.  I loved how his history, his back story, was mostly shrouded in mystery and rumor.  I would love to read some more about the character.

The creatures summoned forth by Demurral all have a grounding in religion and spirituality.  For me, that adds another dimension to the creatures instead of just being the normal, bog standard creatures that are so popular in the fantasy genre.

At times, the religious / spiritual side of the story really can come across as feeling quite preachy and while that can start to grate at times, it doesn't destroy the enjoyment of the novel.  It is most definitely the pacing that is the strong point of this book though.  There are moments of just action after action and then scenes where the reader can take a breather but Taylor really picks the perfect moments to flit between the two.  One moment having a battle the next minute a simple scene where the characters are talking about what to do next.

The ending is left a little open ended, afterall there were follow up stories to this one, but not in one of those annoying 'lots of loose ends' kind of ways.  You could easily read this one and then leave it at that or you can pick up the other books and slot straight back in to the world that G.P. Taylor has created here.

While this isn't a perfect book by any stretch of the imagination, it's a fast paced and exciting debut novel and I, for one, will be picking up the next one in the series.