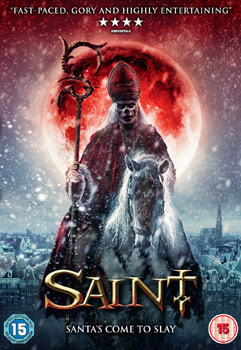 (Aka Sint, Aka Saint Nicholas)

On 5th December 1492, a gang led by the former bishop Niklas are murdered by villagers hell bent on stopping their robbing and looting.

When a full moon happens on 5th December 2010, the gang and the murderous bishop are released to unleash hell and murder on the unsuspecting village as they celebrate Saint Nicholas Day.

I watched this movie straight after watching the movie 'Santa's Slay' as my way of dealing the the rush of the normal, sterile Christmas movies that are so easily churned out this time of year.

While that movie was funny in a so bad it's good way, this one is absolutely superb.

The Dutch have a great reputation for good quality horror with a very dark sense of humor running through proceedings and that's no different here.  The movie both had me glued to the screen for the story and the humor had me howling with laughter.

The cast do a stand up job with their pithy dialogue and really make  the characters their own, however it's one character that stands out more than any other.  That's the murderous demon Saint Nicholas played by Huub Stapel.  Considering his face is covered with prosthetics, he really gives a menacing and creepy performance.

Deaths wise, and let's be honest that's why you are watching a horror movie, they're pretty gory and inventive.  They even manage to throw in some digs at other horror movie deaths as well.  If this was an American movie then the kids  would get off scot free as the old saying goes.  Not here.  The parents are murdered in various brutal ways and the kids are viciously kidnapped.  Only God knows what happens to them on that ghostly ship of Saint Nicholas's.

The only part of the movie I was disappointed with, considering how inventive the deaths were and how cleverly written the movie was, was the ending.  It just seemed kind of there, like they had tacked it on because they didn't really know where they were going with the action.  That's a really shame because the director, Dick Maas, is a very good writer / director and normally comes up with a great ending in his movies.

Picture wise the disc is really good, which considering just how many dark scenes there are, shows how good a job they did.  The sound however is a little quiet at times but that said, it's clear as crystal too.

It's a really big shame that there are no special features as I would have loved to learn more about the make up or the special effects but considering you can get this fantastic, fast paced movie for next to nothing then that's not really too much of a hardship now is it?

Ignore the relatively low overall score for this movie.  That's just down to the fact that there are no special features at all.  This is a fast paced, well acted and completely unapologetic movie that knows it is a stalk and slash movie set during the festive period and proud of it.  Funny, gory and well written, you could do a lot worse than this movie.  Give it a go, you'll be happy you did!