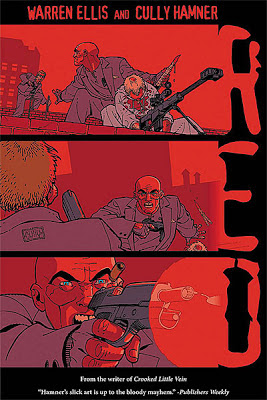 
Paul Moses is a man with too much blood on his hands. For years, masquerading as a low-level clerk, he has travelled the world as a CIA agent, coldly and mercilessly killing America's enemies.
Now, Moses is old, retired, and wants nothing more than to grow old and die in peace. But when a new, politically-appointed CIA director discovers Moses' existence and history, he gives the order for Moses' death, setting a chain of events in motion that nobody could have predicted...Acclaimed writer Warren Ellis ("Planterary" and "The Authority") and artist Cully Hamner ("Black Lightning") present a bloody action thriller in the mode of "24".

Warren Ellis has always massively divided my opinions with his work. For every story that I really enjoy, there always seems to be one that I find to be an absolute disappointment.

This one however is definitely one of the good ones. In fact, I would even say that it is one of the best things that he has written.

The story itself is a relatively simple one and covers well worn ground. A retired assassin is deemed a threat by someone in power and has people sent after him to take him out. However he survives and goes on a revenge spree. While not an original story, Warren Ellis has crafted a well written and gripping story.

Despite it's short length, the comic only ran for three issues after all, they manage to fit a hell of a lot of action in to that short span. I did really like the character of Paul Moses. They gave just enough of his past away to make sure he wasn't a stereotypical character but left the rest a mystery. That approach works really well here as you are unsure of his skills and of how good he is at his job.

The artwork is superb. Normally I'm not a fan of the clean and clinical look that Hamner has gone for here but with this story it works superbly. The flashes of color in the action scenes really stay in the mind long after you have put the book down but it's the little details that make the artwork so good. The beads of sweat on a captives head, the slight glisten in Moses eyes. It's the little things that really add up and make the level of quality here higher.

Even if you're not a Warren Ellis fan I would definitely urge you to pick this one up. While it is short, the length of the release is padded out with some great artwork from when they were coming up with the story as well as the script for the first issue.

All in all a great release to pick up.

Posted by Pat Scattergood at 14:34