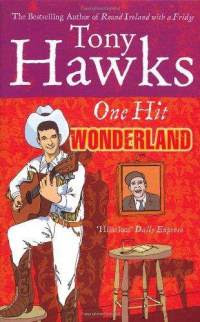 
This work rewinds to 1988. Britain is in the grip of a phenomenon. Radios across the land blast out a new sound. The song is 'Stutter Rap'. The group is Morris Minor and the Majors. The man behind it is Tony Hawks. Fast forward to the 21st century and Tony has left those heady music biz days behind. That cherished appearance on "Top Of The Pops" is but a distant memory. These days music is just a hobby.

That is until it is suggested that Tony is a One Hit Wonder. That he will never have a hit again, ever. Really? Well, we'll see about that... Over the next two years Tony battles against all the odds to have a hit, somewhere - anywhere - in the world. He changes act and styles with a bewildering lack of integrity. He travels to Nashville, the song-writing capital of the universe; to Amsterdam for that elusive novelty Euro anthem and even to Africa in search of the perfect melody. In his quest for pop immortality Tony leaves no stone unturned. But it's only after a chance encounter with Norman Wisdom that things get really strange. Is it really possible that together they could crash the charts in Albania?Amidst all the uncertainty only one thing is clear - in "One Hit Wonderland" is possible.

Tony Hawks is best known as a comedian and musician who makes the occasional appearance on television panel shows that seem to be so popular.

Yet he also is a very accomplished writer as well. His books are about his random adventures that normally have a very strong heart and soul at the center of them while at the same time being insanely funny.

It's no different here. After having a pop hit in 1988 with his then band Morris Minor and the Majors and even appearing on the legendary music show Top of the Pops, his friends tease him mercilessly about being a 'one hit wonder' and Hawks decides to do something about it in his own, relentlessly bizarre way.

He travels around the world ranging from Nashville to try to make a country record to Amsterdam to try to get that elusive novelty Euro hit and everywhere in between.

After a chance meeting with Norman Wisdom that results in him jumping on board with the idea as well, they travel to Albania to try to storm their charts.

While yes it's all rather silly, this manages to be a story of hope and determination wrapped up in tears of laughter.

This truly is a very funny story and you can't help but root for this motley band of fools to succeed just so they can go home triumphantly.

Overall the book is written in a high, simple way that just absolutely rolls off the page and makes you feel positively involved in proceedings. The sheer sense of fun, even when things go completely wrong, shines off of every page.

I had a hell of a lot of fun reading this book and so will you guys. I honestly, highly recommend this to anyone that just wants to sit down with a good book and relax all while having a good laugh.

I, for one, will definitely be looking in to getting some of his other books because if they are half as good as this one then they will be great.