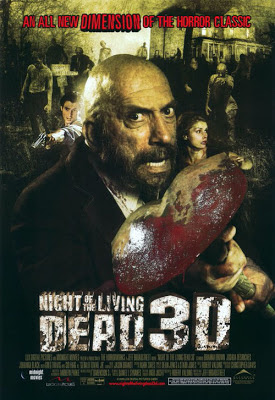 Written By Robert Valding based on the 1968 screenplay by George A. Romero and John A. Russo
Directed By Jeff Broadsheet


Both an homage to and a re-make of the original George Romero 1968 classic film, this update follows a group of survivors trapped in a farmhouse battling a siege of undead zombies....in 3D!
Barb and her brother Johnny arrive late for the burial of their aunt -- and walk straight into a nightmare. With zombies on her heels, Barb flees the cemetery and is rescued by Ben, a local college student. The two seek refuge in the nearby farmhouse of the Cooper family, where the laid-back residents aren't remotely prepared to have their lives turn into a horror movie. But Barb is destined for an even grimmer confrontation -- with the local mortician, Gerald Tovar, Jr

Special Features
Review
I'm always weary when I see that a movie is a remake or a homage to the original 'Night of the Living Dead' because with that one, George Romero directed an absolute classic that still stands up today.

Most of the remakes, homages or re-imagined versions of the now classic tale have either been OK yet forgettable or downright awful.

While this one isn't completely awful, neither is it a good movie either. It sure as hell is a fun one though.

While the scares are there, although not in a very large amount, it's more the gimmick of seeing it in 3D that makes this movie work as well as it does.

The acting is pretty sub-par by most of the cast and some of the changes made to the characters themselves have pretty much ruined the point of the movie, it's one man that holds the movie together and stops it from being a 2 rating or even a 1.

That's Captain Spaulding himself, Sid Haig, as Gerald Tovar Jr. He seems to be absolute relishing his cheesy and creepy role. In fact, he absolutely hams it up to such an OTT degree that it is fun as hell to watch.

The special features are superb for a mid budget movie and are actually really interesting. Out of them all, I really liked the Q and A with Sid Haig because of the simple fact that he made it sound like a complete blast to make this movie.

I want to be clear about one thing here. This movie is not good. It's nowhere near the George Romero classic and the acting is mostly so bad it's funny. The one thing this movie is, is a hell of a lot of fun. The 3D works without being too much and Sid Haig is an absolute riot in this movie.

If you want a classic zombie movie then go watch the Romero original. If you want a dark, grimy zombie movie with a lot of laughs, most of which are unintentional, then this is the movie for you.
Movie 3
Picture 3
Sound 4
Special Features 4
Overall 14/20
Posted by Pat Scattergood at 14:24