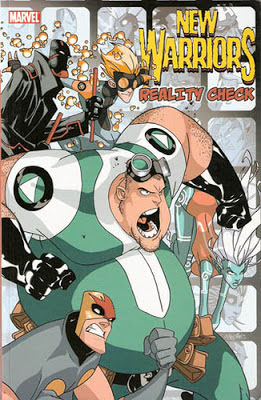 After falling on hard times, the New Warriors have been left as the laughing stock of the superhero world so they look to the one thing that they hope can revive their flagging fortunes.  Reality TV!

After signing up to a show, they take trips around the country solving problems of all shapes and sizes in the hope that it will help revive their flagging fortunes but will the plan work or leave them even more of a laughing stock?

The New Warriors were always a favorite of mine growing up.  Their brutal and exciting adventures absolutely thrilled my young mind and fuelled my love of comic books.

Then they sadly fell out of favor with both fans and comic book writers, only making appearances here and there.

There was an attempted relaunch in 1999, which was a complete failure with bad writing and rehased stories.  Gladly it only lasted 11 issues and then disappeared again until this collection.

The bad ass nature of the team has completely disappeared, replaced with wise cracks and really labored jokes about the nature the world around them and the awful genre known as reality television.  None of them are really jokes that you wouldn't have heard before.

The stories themselves are alright for the most part but over all seem to fall a little flat.  The best of this six issue run is the 'Super Apes' story that deals with many issues, one of which being a relatively well written look at animal rights.  The rest of  the stories, while not awful, just didn't excite the 'New Warriors' fan in me.

However, as a entry level comic book for younger teens, this would probably be a gentler way to get them in to the superhero world.

The artwork is a bit like the story.  It's not awful but it doesn't exactly set the page on fire with excitement either.  Some of the characters are drawn well but a couple, such as Night Thrasher, look really cartoony and deformed.  As a 'New Warriors' fan I found this quite distracting.  I know artists and styles change but it just didn't suit the character.  Although once again, the easy and cartoony style of the artwork could be a good way of the younger fans out there getting in to reading the comics themselves.

All in all, if you are a 'New Warriors' fan then you might be quite disappointed here.  The stories aren't awful by any nature but they're not exactly memorable either and it's the same problem with the artwork.

However, if you are a new comer to comic books in general or maybe you want to buy a simpler, less violent comic book to get a youngster in to then you could do a hell of a lot worse than this title.