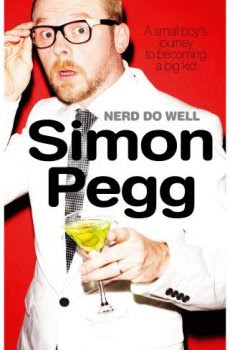 
Zombies in North London, death cults in the West Country, the engineering deck of the Enterprise: Simon Pegg has been ploughing some bizarre furrows in recent times.

Having blasted onto the small screens with his now legendary sitcom "Spaced", his rise to nation's favourite son status has been mercurial, meteoric, megatronnic, but mostly just plain great. From his childhood (and subsequently adult) obsession with Star Wars, his often passionate friendship with Nick Frost, and his forays into stand-up which began with his regular Monday morning slot in front of his 12-year-old classmates, this is a joyous tale of a homegrown superstar and a local boy made good.

I became a massive fan of Pegg’s when Channel 4 started showing a new, or at least it was then, comedy show called ‘Spaced’. Full of quirky jokes, geeky one liners and brilliantly written characters, it quickly became one of my favorite television shows. Then following on from his brilliant performances in ‘Run Fatboy Run’ and ‘Star Trek’, he decided to write his autobiography.

I started to read this with a slight sense of trepidation. Autobiographies can go one of two ways. Either be very well observed or be incredibly narcissistic. I shouldn’t have been worried about this one though. It’s written in such a way that the stories read as if you’re sat with Pegg himself having a chat.

The stories about his childhood leave you with such a poignant sense of pride that he obviously has for his parents that you can’t help but warm to him and wish all his hopes come true. Obviously they have done, otherwise I wouldn’t be reading his autobiography, yet his written comes forward with such a sense of hope and wonder that you can’t wait to see what happens next.

The stories about his early forays in to comedy and acting have such a nerdy charm to him that it’s like you’re reading about someone you have known for years. He is just so passionate about his love for science-fiction, for comedy, for acting and writing that you just get completely sucked in to the book.

The best part in my opinion is when he recounts how he met his long-time best friend, Nick Frost. It reads like a fully formed romance in some ways. You can really read how much affection and pride he has for his best friend and in this day and age, that’s a very rare thing indeed.

Posted by Pat Scattergood at 15:00