Nausicaa of the Valley of the Wind DVD Review 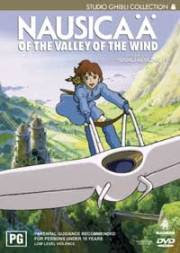 The film tells the story of Nausicaä (Shimamoto), a young princess of the Valley of the Wind who gets involved in a struggle with Tolmekia, a kingdom that tries to use an ancient weapon to eradicate a jungle of mutant giant insects. Nausicaä must stop the Tolmekians from enraging these creatures.

While technically created before the formation of the now legendary Studio Ghibli, this beautiful anime can most definitely be seen as the beginning of their legacy.

The story itself is based on the Manga by the highly influential writer Hayao Miyazaki, who didn't want his story adapted at first but relented when told that he could direct it.  Because of that, the movie itself stays true to the plot and feeling of the Manga.

'Nausicaa of the Valley of the Wind' has an incredibly strong ecological message to put out to the viewers but doesn't beat them over the head with it or try to force the importance of the planet.  It's done in subtle ways and by using some absolutely amazing scenary doing the movie.  The scenes underground where the characters see that the trees are dying and turning in to sand is one of the most beautiful scenes I have ever seen in an anime movie.

The characters themselves are very well written and have strong personalities to separate them all.  Sometimes in an anime some of the characters can blend in to one but not here.  Each one is done so they are completely different, even the bit part players.  That can be down to a mix of the intelligent writing and of the great voice cast.

Talking of the voice cast, the dubbed over versions of anime's can be a bit poor when compared to the quality of the original Japanese cast but here that is very far from the case.  Both casts are absolutely superb.

For me the stand out of the Japanese cast is Sumi Shimamoto as the Princess.  She gives a beautifully, pained performance and really makes her a character that you can't take your eyes off of.  The sheer amount of emotion in her portrayal gave me goosebumps, especially near the end of the movie.

As for the american cast, Alison Lohman does nearly as good a job as Shimamoto does but the sheer grandeur of Patrick Stewart as Master Yupa was a greating bit of casting.  He gives the character a real air of importance and of respect.

The special features are superb for this set.  In particular, the storyboards were a great touch as it's always great to see the genesis and growth of a movie from that stage right up to the finished product.  That's the same for this movie too, it was great to see how a movie so beautiful came in to being.

All in all, this is an absolute classic of the anime genre and most definitely should be seen as one of the jewels in Studio Ghibli's crown.