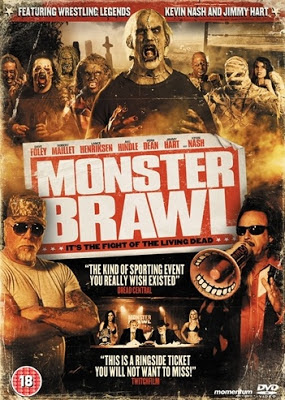 
Live from a cursed abandoned graveyard in America's Deep South, comes a grotesque and hilarious fight to the death starring eight of the world's most feared creatures.

Including the likes of The Werewolf, The Mummy and Frankenstein's Monster, who along with their colourful managers, compete in visceral bloody combat in the ring to answer the question once and for all: who is the most powerful monster of all time?!

Special Features
Review
This movie is going to be a bit of a divider for most people. Some, like myself, will find it very enjoyable and funny and others will no doubt find it to be complete crap.

I have grown up a wrestling fan and even now enjoy the show and the fun of watching it and that's exactly what we have here. It's like watching wrestling but with classic monsters such as the Wolf Man, Frankenstein's Monster, the Mummy etc.

The story is pretty non existent but the characters have got their back stories all set up in little vignettes before their matches and they even have their own promo interviews to hype up their matches.

Talking of the matches, they may be quick but they are funny as well and really entertaining. The commentary by Dave Foley and Art Hindle is done in such a way that it manages to be hokey but fit the matches perfectly.

The cast is actually really well chosen and do their rather cheesy parts quite well. None of them take their roles very seriously but that adds up to the comedy of the movie. The choice of Lance Henriksen to do 'Mortal Kombat' style commentary however was a fantastic choice and had me in hysterics on more than one moment.

The movie references and video game references come thick and fast. My favorite line of the movie however was after Jimmy Hart, the legendary wrestling manager, introduced Frankstein's monster to the ring but called him Frankenstein. Art Hingle then replied with "it's Frankenstein's Monster if you want to be a dick about it."

The special features are pretty good for a mid budget movie such as this and it looks like it was an absolute blast to make the film. The Jimmy Hart blooper reel is hilarious and had me crying with laughter.

While it will most definitely divide movie fans because of it's format and the sheer, unadulterated cheese factor but personally, I absolutely loved it and enjoyed every intentionally and unintentionally funny moment of it.
Movie 3.5/5
Picture 4.5/5
Sound 4.5/5
Special Features 3.5/5
Overall 16/20
Posted by Pat Scattergood at 07:53