Marvel Chillers: Spider-Man and the Mark of the Man-Wolf Graphic Novel Review 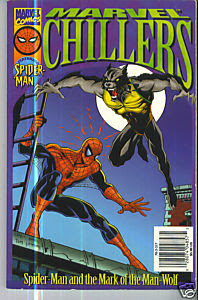 Spider-Man encounters a Man-Wolf with a grudge against J. Jonah Jameson.  But why is he going after Jameson and can Spider-Man stop him when all he can think of is the death of Gwen Stacey at the hands of the Green Goblin?

The 'Marvel Chillers' line is a bit of a strange one to be perfectly honest. They took classic comic book stories, turned them in to graphic novel sized books then threw in some of the original artwork from the comics.

Sometimes the idea worked and sometimes it didn't.

This one is one of those where it doesn't quite work. The original story by Gerry Conway and illustrated by greats such as Gil Kane, Ross Andru and John Romita Sr. is one of the great tales of that period of Spider-Man's existence but here it comes across as rather simplistic.

Mindy Newell's writing doesn't really do the story justice and really strips the story back to its absolute basics. I think that in all honesty that hurts what was a gothic styled chiller.

The inclusion of some of the original artwork helps as does the chapter devider artwork by Sal Buscema and John Romita Jr.

While to me the story has been really watered down and made simplistic, which loses some of the quality of the original, it could be used as a good introduction to the Spider-Man world for some of the younger fans out there so maybe it's not a complete bust.