Love All The People: Letters, Lyrics and Routines by Bill Hicks 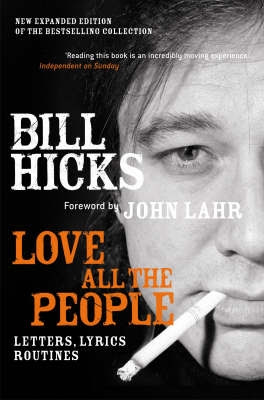 Written By Bill Hicks with a foreword by John Lahr


Bill Hicks was arguably the most influential stand-up comedian of the last 30 years. He was funny, out of hand, impossible to ignore and genuinely disturbing. His work has inspired Michael Moore, Mark Thomas and Robert Newman among others.

Bill Hicks was and always will be one of the sharpest, most satirical and scathing comedians that America has ever produced. Always imitated but never bettered, Hicks could launch an absolutely savage attack on a subject full of bile and anger yet sound so calm and deliberate about it.

That’s why when I saw this book, I just had to buy it. As a massive Bill Hicks fan, I couldn’t wait to get it home and read the letters he wrote and the lyrics as well as the routines. Boy was I not disappointed.

While on paper some of the routines may seem a little dated, they’re still incredibly biting and relevant today. Take his rants about the 1st Gulf War for example. Just change the names and bam, it’s talking about today. While I may not agree with some of his pro-drug rants, I do still find them funny. Especially the rants about how certain things are completely blown out of proportion.

I would be incredibly dumb to not mention where he writes about his skit being taken off of the broadcast version of David Letterman’s show. After being told that it was fine and that people loved it only for it to be thrown away like garbage must have angered him so much as evidenced here.

The only complaint I have is that some of the jokes are repeated throughout the book but then again, those were obviously his favorite ones to tell so of course they’ll be in there more than once.

All in all a good purchase for anybody in stand up comedy and an essential purchase for fellow Bill Hicks fans.