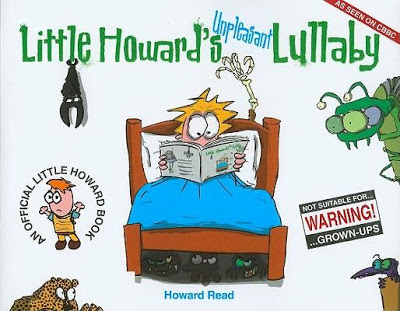 Big Howard tries to get Little Howard to sleep with a beautiful song.  However it doesn't go according to plan and the song soon turns in to stories of spooks, ghouls and zombies.  Will Little Howard ever go to sleep?

Perrier Award nominated comedian Howard Read has crafted an absolutely beautifully illustrated and hilariously funny children's book that had both myself and my son in hysterics of laughter.

The song starts off like a really sweet lullaby but when it starts to turn in to little horror stories and tales of spooks and ghouls, the laughter factor is really ramped up and it works superbly.  This may sound like it would scare the crap out of children reading it but that's not the case.  The song / story is done in such a funny, tongue in cheek way that it really can't be taken seriously in the slightest.  The ending of the book is fantastic in it's simplicity but had my son roaring with laughter.

The illustration here is just like the children's show on CBBC and really adds to the whole story.  The art as the story goes on and more nightmare creatures are introduced is absolutely fantastic and really wouldn't look out of place in a Spike Milligan or Roald Dahl book.

All in all, I really can't praise this book high enough.  Like I said earlier, it really has hints of Roald Dahl and Spike Milligan throughout the story but it still manages to be completely original and an absolute riot to read.  Superb.