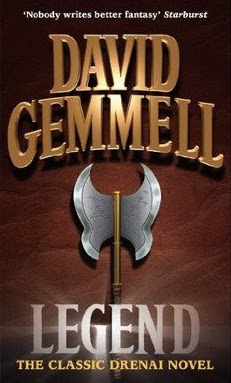 
Druss, Captain of the Axe: the stories of his life were told everywhere. Instead of the wealth and fame he could have claimed, he had chosen a mountain lair, high in the lonely country bordering on the clouds.
There the grizzled old warrior kept company with snow leopards and awaited his old enemy death.

The Fortress
Mighty Dros Delnoch, protected by six outer walls, the only route by which an army could pass through the mountains. It was the stronghold of the Drenai empire. And now it was the last battleground, for all else had fallen before the Nadir hordes.

And hope rested on the skills of that one old man...

David Gemmell is a remarkably prolific fantasy author, most of which have gone on to be best sellers.

This one was written 20 years or so and has re-released many times over in order to make new fans out of each new generation.

Even now, after all that time has passed, this novel still stands up to near constant re-reading. In fact, with each new reading a new facet to the story is found and you start to read the story in a new light. It's also the first of the many 'Drenai' saga novels and what a great debut for the saga.

The story is a relatively simple one. A legendary figure from the Drenai's past has retired from a life of constant battle and warfare and is enjoying a quiet existence. Suddenly a brutal race decides that the kingdom is ripe for the picking and set off to overwhelm the already outnumbered fortress that guards it. That's when Druss, the legendary figure stands up to attempt to redeem himself and face his old enemy, death.

While the story itself isn't exactly an original one in the fantasy world, it's still an absolutely rip roaring adventure written in such a way by the brilliant author David Gemmell, that there are many layers to the story. It's true that some of the characters are just there as a type of 'cannon fodder' for the battle but when the battles are written this well and with such a high level of detail that little fault doesn't really matter all that much. In fact, the battles are written in such a way that the reader really gets involved and can't wait to get through to the end to see who survives and who doesn't.

The character of Druss the Legend is a superbly written one. While the idea behind an old warrior looking to regain some form of honor is a bit of a fantasy novel cliche, that's not the only layer to this character. In fact, the way he is written means that he honestly be out of place in a book or two by Tolkien, the undisputed master of the fantasy genre.

To say much more about the characters or plot would give it away in all honesty but if you like authors like J.R.R. Tolkien, Mercedes Lackey etc, then you will absolutely love this novel.