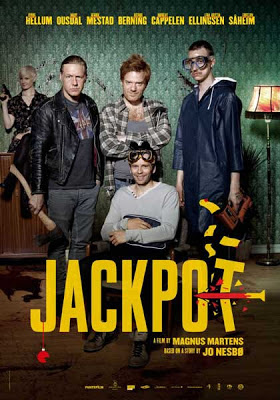 Terrified and bloody, Oscar Svendsen awakes clinched to a shotgun in a strippers joint. Around him 8 dead men, and police aiming at him. To Oscar it's clear that he is innocent. It all started when four chaps won 1,7 million on the pools...

Recently there has been a glut of quality movies from places such as Swedan and Norway and this one is no different.

Full of action and dark comedy, this movie had me gripped from the very beginning.

At the start, you are shown a scene of pure carnage.  There are bloodied bodies in a strip joint and suddenly, a blood covered Oscar emerges from under the body of a larger lady holding a shotgun and looking absolutely terrified.  Slowly, after being questioned by the police, the jigsaw of a story falls in to place and we are treated to a darkly comic and exciting tale of greed and money.

The story, written by the director Magnus Martens but based on a story by Jo Nesbo, is a fast paced thriller full of twists and turns that even David Mamet would be proud of but that's not what sets it apart from the other crime thrillers out there.  It's the humor that is so frequently found in Scandinavian movies that tips it over from being good to being wildly entertaining.  In fact, the best way I can think of to describe the style of this movie is that it's a mix of a Cohen Brothers movie and the old school, gore filled Peter Jackson horror movies.

The cast is absolutely spot on.  They play their parts superbly and with a dead straight delivery but that makes both the thriller part of the movie and the humorous part mesh so well.  The best of the cast performances are by far those of Kyrre Hellum as Oscar and Mads Ousdal as Thor.  They really portray the characters as best friends and it's completely believable that they have known each other all their lives.

For a movie that tries to be many different genres at once, it was a very pleasant to find that it works fantastically well.  The humor had me absolutely howling with laughter and the crime thriller side of things had me on the edge of my seat wanting to know what was going to happen next.

While the twist ending isn't the most original ending ever used, the rest of the movie really comes across as an original and very entertaining thrill ride.

Definitely recommended for the Tarantino and Cohen fans amongst us.

Available to buy on DVD and Blu-Ray 7th January 2013
Posted by Pat Scattergood at 14:28